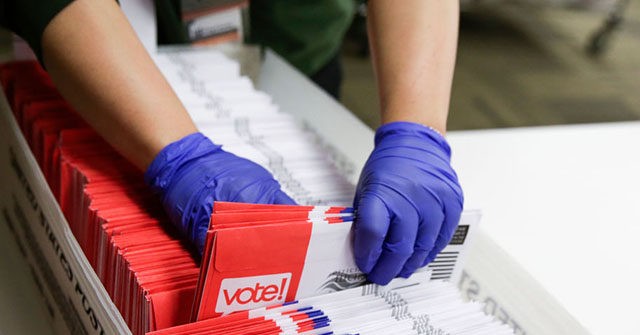 Stay tuned to Breitbart News for live updates of the 2020 presidential election.

PENNSYLVANIA UPDATE 11: I've been saying from the beginning that Joe Biden will win PA. Here's two examples, from each side of the Commonwealth, on why I think it'll happen. pic.twitter.com/xffSwjGATc

Donald Trump is projected to win the one Electoral College vote from Maine's 2nd District. BDN and @DecisionDeskHQ called the race at 10:27 a.m. Story coming. #mepolitics #ME02

11:35 AM: Michigan Secretary of State Jocelyn Benson speaking to voters:

Secretary of State Jocelyn Benson says during press briefing just now that she's “optimistic” that full unofficial results will be ready by the end of the day.

Michigan Secretary of State Jocelyn Benson: “Ballots are still being counted in our largest jurisdictions.” Number of ballots out still exceeds the margin between the candidates. Hopes to have unofficial tally in next 24 hours. Current Biden lead is 29,525.

Why didn’t they count mail ballots earlier? Because the state legislature blocked repeated requests from the state government to do exactly that, she says.

11:32 AM: Wisconsin has finished counting regular ballots. There could be some provisional ballots left to count.

NEW: “All of the ballots have indeed been counted” Wisconsin Elections Commission Administrator Meagan Wolfe says on @NBCNews.

“We're not seeing that there's any counties that haven't posted their results on their websites.”

NBC News currently has Biden ahead by 20,697 votes.

Twitter spox: “As votes are still being counted across the country, our teams continue to take enforcement action on Tweets that prematurely declare victory or contain misleading information about the election broadly.”

Michigan update: recently updated and reported results now include absentee ballots voted by citizens in Livonia and Dearborn. Detroit, Flint, Grand Rapids still have yet to fully complete and report their tabulation of every ballot.

Trump campaign officials telling reporters.. they trust their data and Gov. Ducey’s data more than “anyone hanging out in Washington DC or New York”…They argue they can win still the state by claiming their margin could end up with 30K votes for the president.

Pennsylvania Gov. Tom Wolf: “Make no mistake: our democracy is being tested in this election. This is a stress test of the ideas upon which this country was founded. The basic rule of one person, one vote — that still carries, and it has to carry here.”

NEW: Biden campaign manager @jomalleydillon says “we expect that at some point later today that the vice president will address the American people.”

How come every time they count Mail-In ballot dumps they are so devastating in their percentage and power of destruction?

10:15 AM: Biden campaign laying out their path to victory. They think Michigan will be called today and Pennsylvania tomorrow. They think this race is “already a foregone conclusion.”

We won't rest until everyone's vote is counted. Tune in as my campaign manager @jomalleydillon and campaign adviser Bob Bauer give an update on where the race stands. https://t.co/Rwz4iR25B3

10:10 AM: Trump campaign not writing off Arizona, Nevada:

Trump campaign manager Bill Stepien says Trump is a “very good position” but he has not said what Trump said yesterday which is that he has already won.