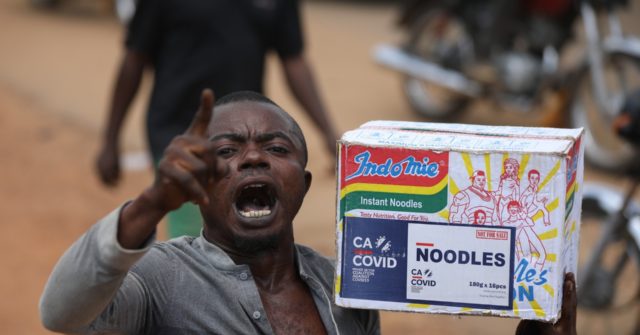 Looters in Nigeria have targeted state-owned warehouses across the country stocked with Chinese coronavirus relief supplies amid outrage at the government for hoarding them, Reuters reported Tuesday.

According to many of those responsible, authorities were hoarding the supplies with the intent to sell them. The National Governors Forum, which brings together the leaders of Nigeria’s 36 states, denied this in a statement, explaining that the looted items were part of a “strategic reserve ahead of a projected second wave of COVID-19 [Chinese coronavirus].”

Looters have nonetheless condemned the continued storage of food, much of which is rotting, months after the mandatory lockdowns ended. In a population of around 195 million, health authorities have recorded just over 64,000 cases, although this figure is likely much higher due to widespread lack of testing.

Reports of rotting food and corruption have prompted outrage across the country. Nigeria is currently experiencing skyrocketing unemployment, aggressive inflation, and a recent wave of anti-police brutality protests that ended with security forces opening fire on protesters.

Among those participating in the ransacking was 29-year-old James, from the northeastern Adamawa state, who told Reuters that he was forced to join in after the government repeatedly failed to provide assistance.

HORROR: A Christian university student was beaten, raped, and killed by a blow to the head with a fire extinguisher in a church in Benin City, Nigeria. https://t.co/oZQDrePBWg

He ended up taking seven cartons of noodles, two bags of sugar, and a bag of rice but said many of the supplies were indeed out of date.

“I was really shocked when I got to the warehouse and saw the quantity of stuff,” he told the agency. “Most of the stuff was out of date and I was like … why are we not getting it?”

Videos of the ransacking across the country have gone viral across social media over the past month, with guards often being overrun by the sheer number of looters. Eventually, state officials were forced to send armed militias to chase them away.

As well as targeting food supplies, looters in the capital of Abuja targeted a warehouse holding various coronavirus vaccine candidates, leading to a plea from the government to return them.

“I want to use this opportunity to appeal to our youths to stop crushing our medical supply stores,” complained Minister of Health Olorinmebe Mamora at the time. “Most of these drugs are kept under controlled temperature and humidity conditions. Destruction of these conditions will render them ineffective and in some cases poisonous.”

Corruption has long been an endemic part of Nigerian political life, contributing to the lack of trust in government and its high poverty rates. According to Transparency International, Nigeria ranks 146 out of 180 countries on its annual corruption index, with the issue seen as a contributing factor in damaging the country’s economic development.