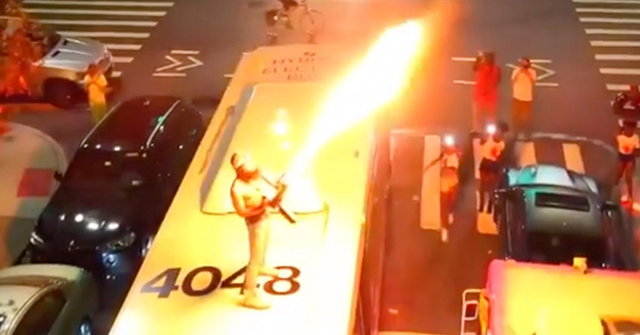 A man with a flamethrower hopped from an ice cream truck to a New York City bus before using the flamethrower to fire away at the public, according to a video.

The video, which was shared Tuesday afternoon on social media, showed the shirtless man shooting a flamethrower on top of an MTA bus in Brooklyn, the New York Daily News reported.

The man sent multiple blasts into the air before setting fire to the road as part of a stunt for a music video. The incident took place around 5:30 p.m. on November 8.

The video showed the man jumping on the B26 bus, which carried more than two dozen passengers, from the ice cream truck and blasted the flamethrower while spectators cheered.

Others shouted and recorded the incident on their cell phones.

The New York Post reported that the stunt was carried out as part of a tribute to a Wu-tang music video by rapper Dupree God, who posted local footage of it to Instagram.

It is unknown if Dupree is the man who jumped on the bus.

The MTA confirmed there were no permits for the stunt and were less than enthused by it.

“We don’t even need to say how absurd, dangerous and just plain stupid this was,” MTA spokesman Tim Minton said. “The reckless individual who torched over the top of an occupied bus put New Yorkers, including the bus operator, in life-threatening peril.”

The New York Police Department (NYPD) said it is investigating after it was made aware of the incident.

We are aware of a video circulating social media that shows a man using a flame thrower on top of a bus in Brooklyn.

The incident is currently under investigation. We have the utmost confidence in our @NYPDDetectives that this case will be solved quickly. pic.twitter.com/KPnMlYJb1g

No injuries were reported on the bus and the 25 passengers on board were moved to another bus at the following stop, the MTA said.

Flamethrowers have become weapons of choice for militant groups such as Antifa.

One self-proclaimed “Antifa Commander,” also known as “Commander Red,” was arrested for carrying a flamethrower at a Wisconsin Black Lives Matter rally and cried at his arrest, the New York Post reported.

WWLP reported that in June, officers seized a flamethrower and arrested a man in Massachusetts. He was charged with carrying a dangerous weapon with an active warrant and possessing an infernal machine, among other charges.

Punk Slugs Cop Out of the Blue, Officer Opens Cruiser Door and Lets ‘Lee’ Handle Him