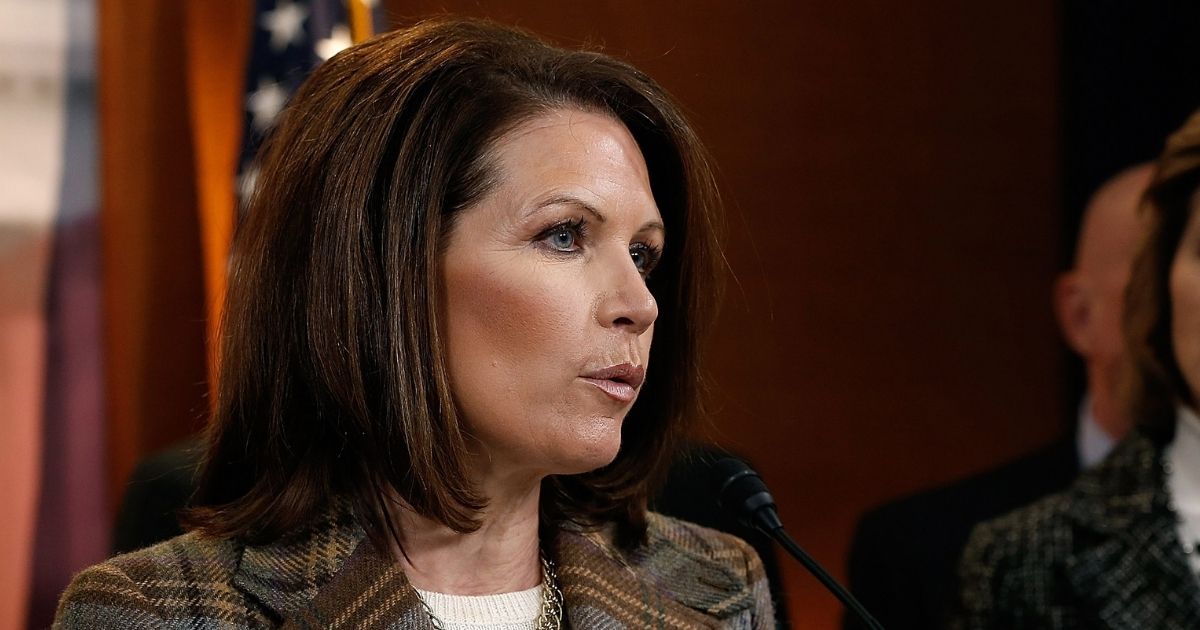 Former Congresswoman Michele Bachmann prayed that God would “smash the delusion” that Democrat Joe Biden will be the nation’s 46th president.

“I ask, O God, that you would take your iron rod, and I ask that you would smash the clay jar of deceit in America,” Bachmann began during a prayer call video posted on Monday.

“Smash the delusion, Father, of Joe Biden as our president. He is not,” she prayed.

The former four-term member of Congress from Minnesota also entreated God to smash the notion that the Democrats will control the legislative branch.

“Would you take your iron rod and smash the strong delusion that Nancy Pelosi does have her House of Representatives. We don’t know that! Smash it, in Jesus’ name!” Bachmann prayed.

“Smash, Lord, the takeover of the U.S. Senate by Chuck Schumer. Lord, smash it with your iron rod!” she added.

Former congresswoman Michele Bachmann calls on God to “smash the delusion, Father, that Joe Biden is our president. He is not.” pic.twitter.com/gqoFP97ipT

Bachmann’s iron rod reference was likely to the Bible’s Psalm 2, which multiple Christian leaders have pointed to in the aftermath of last week’s presidential election.

Do you think Trump will ultimately be named the winner of the presidential race?

“Ask of me, and I will make the nations your heritage, and the ends of the earth your possession,” the Psalmist writes, as speaking for God.

“You shall break them with a rod of iron and dash them in pieces like a potter’s vessel,” the passage continues.

Earlier in the Psalm, the writer describes the sovereignty of God over the affairs of this world.

“Why do the nations rage and the peoples plot in vain? The kings of the earth set themselves, and the rulers take counsel together, against the Lord and against his Anointed, saying, ‘Let us burst their bonds apart and cast away their cords from us.’

“He who sits in the heavens laughs; the Lord holds them in derision,” the Psalmist states.

“Now therefore, O kings, be wise; be warned, O rulers of the earth. Serve the Lord with fear, and rejoice with trembling,” the writer concludes.

Bachmann was among the Christian leaders who participated in the Rev. Franklin Graham’s Prayer March 2020 on the National Mall in Washington, D.C., last month where leaders prayed for God to move in the nation.

Graham shares Bachmann’s concern that the reported election results may not be an accurate reflection of how the people voted.

“I ask that you continue to pray for our nation and this election,” Graham tweeted last week. “Many fear that some are trying to steal the election, so join me in praying that the will of God would be done.”

“Pray that the enemies of God would be quieted and that all their plans would be put to nothing.”

I ask that you continue to pray for our nation and this election. Many fear that some are trying to steal the election, so join me in praying that the will of God would be done. Pray that the enemies of God would be quieted and that all their plans would be put to nothing.

Graham added on Monday, “As the courts determine who wins the presidency, there is another key race that is extremely important to the future governance of our nation. January 5 there will be a runoff in Georgia that could change the make-up of the Senate.”

As the courts determine who wins the presidency, there is another key race that is extremely important to the future governance of our nation. January 5 there will be a runoff in Georgia that could change the make-up of the Senate. https://t.co/mgPmm3CLu7

“If the Senate changes & does not have a conservative majority, there will be nothing to stop the socialist agenda from making sweeping changes,” the preacher continued.

“So we need to pray, and I strongly encourage Christians in Georgia to vote for the candidates who support their values.”

Popular Christian speaker Dutch Sheets has launched a daily prayer initiative regarding the elections, particularly for the presidential race.

Sheets is among those Christian leaders who believe it is God’s will for President Donald Trump to serve a second term.

In a video posted to YouTube last week titled, “This Election Is Not Over,” Sheets said, “I believe the enemy is trying to steal this election from Donald Trump, because I believe we need him in office to continue doing what he’s been doing, which is a part of positioning America for God’s purpose in the future.”

“This is about the greatest revival that has ever come to the planet that is beginning and God needs America positioned properly to play a role in that. We will play a significant role in that,” he added.

“I believe that there has been rampant fraud and deceit in this election,” Sheets said, citing news accounts and a report from a friend of his who was a poll challenger in Detroit.

Sheets read an account from the man who said Michigan law regarding contested ballots was “completely ignored” at the vote processing center.

The man also said the Dominion Voting Systems tabulator used in Detroit was “showing a system compromise warning” at various points throughout the evening.

Antrim County in northwest Michigan flipped from a win for Joe Biden to one for Trump after the discovery of a software glitch in the Dominion Voting Systems election management system used by election officials.

“I am absolutely positive that there has been an evil conspiracy to steal this election from President Trump,” Sheets said regarding all the irregularities reported.

He also read from a piece by evangelist Mario Murillo, who wrote, “On election day morning, the Holy Spirit spoke to me and said, ‘Something you are not expecting is going to happen tonight. But do not fear, because God has a surprise for all of you,’” regarding the ultimate election results.

Additionally, Sheets cited a post by Australian Christian speaker Lana Vawser, who wrote in response to the election, that Psalm 2:4 came to her: “He who sits in the heavens laughs. The Lord scoffs at them.”

Sheets also pointed to Christian speaker Chuck Pierce’s understanding from God regarding the turmoil in the U.S. until mid-January, as likely also meaning the election will not be resolved for weeks or months.

On Tuesday during Sheets’ daily devotion about the election, he said, “We are in a Psalm 2 moment” and used the same language Bachmann did.

“Your domain will stretch to the ends of the earth,” he said quoting The Passion translation of Psalm 2 regarding God’s sovereign rule. “And you will shepherd them with unlimited authority, crushing their rebellion as an iron rod smashes jars of clay.”

Sheets likened the election results to Christ’s enemies thinking they had won when they executed him, not realizing a resurrection was on the way.

“While those on the left rejoice, we’re still waiting for the legal results of this election,” he said.

Sheets encouraged people to decree: “Christ’s rod of authority is falling against the coup over America. It will be fully exposed to the Light! Justice will come and America will be saved!”

Noted Christian speaker and author Lance Wallnau told The Western Journal late last month before the election that he believes “God is playing chess” regarding its outcome, which he predicted would ultimately be for Trump.

Wallnau — who USA Today reported to be among “the evangelicals who prophesied a Trump win” in 2016 — said prior to this election he believed, contrary to the polls, it would be close and questions about the integrity of ballots would lead to court challenges but the president would win in the end.

He saw God’s providence in play regarding the elevation of Amy Coney Barrett to the Supreme Court before the election in light of these court challenges.

“I think it’s going possibly to the Supreme Court, and one vote [will make the difference], because I can’t count on [Chief Justice John] Roberts for anything. One vote could actually make Trump an appointed president rather than an elected president,” Wallnau said.

He reaffirmed his anticipation of a Trump victory in a video posted on Tuesday.

“I think Trump’s going to win,” he said, but added that Christians can’t stand by. “You’re going to have to show up at some protests. Don’t just be a hand-wringing Pentecostal praying.”

He exhorted Trump to hold rallies.

“I personally believe this is going to turn into the great awakening,” he added. “If righteous prevails we’re going to win this one.”

Wallnau also encouraged people to pray for Pennsylvania and Georgia in particular.

“We’re in spiritual warfare and it’s information warfare,” he said. “The Lord is saving America, and he’s going to expose the corruption. “