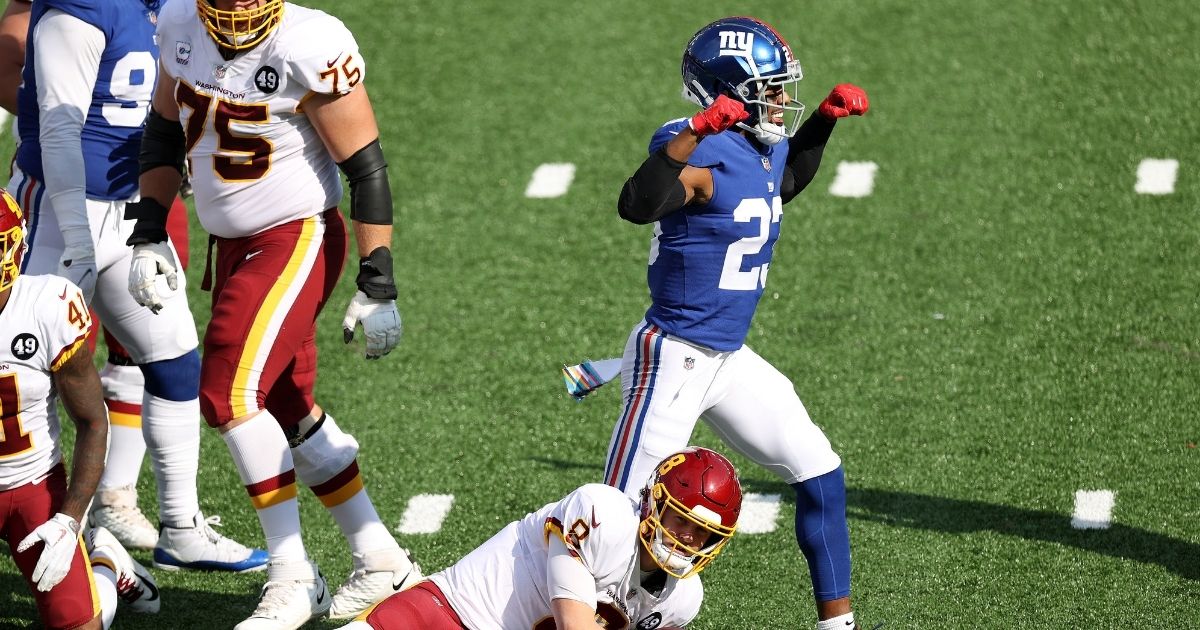 Logan Ryan, free safety for the Giants, and his wife Ashley have been married for three years. Together they have 5-year-old Avery and 2-year-old Otto Dash, but this week the family could have lost Ashley.

On Tuesday, Logan stayed in New Jersey while Ashley was back in Florida to check on their house and officially vote. She experienced extreme stomach discomfort while there, and if Logan hadn’t mentioned it to New York Giants trainer Justin Maher, today she could be in much worse condition or even dead.

“I talked to one of our trainers about the symptoms,” Logan said, according to ESPN. “He said, ‘No, she needs to go to the [emergency room].'”

She went, and doctors discovered that she had an ectopic pregnancy in her fallopian tube, which could cause terrible internal bleeding if it burst.

TRENDING: There's Still the Possibility of a 269-269 Electoral College Tie – Here's What Would Happen Next

“She ended up going to surgery and they ended up saving her and preventing a lot of what could have been done,” Logan explained. “That was a trainer on our team, Justin Maher, telling my wife to go to the ER at 1 a.m. It could have saved her life or saved a lot of internal bleeding there.”

Initially, Ashley brushed off the excruciating pain as a stomach issue of some sort and had planned to just go to bed.

“Logan had just left the facility after getting post-game treatment and texted one of the Giants trainers about what was going on. As much as I wanted to eat some Tums and try to go back to sleep,” she shared in an Instagram story, according to People, “I followed this trainer’s advice, and my sister took me to the ER.”

The diagnosis came as a shock to Ashley, who had an IUD and confirmed the chances of getting pregnant while using one was “less than 1 percent.”

“The pain was unbearable,” she continued in her story. “The emotions that followed were unbearable. I am still sorting through most of this in my own head. Why was I that one percent? What does this mean for the future? How that trainer quite possibly saved my life.”

Ashley had surgery Wednesday morning to address the fallopian tube rupture and internal bleeding. The Ryans are clearly shaken after the emotional roller coaster ride they were just put through, but thankful for that trainer’s recommendation and the understanding of those around them.

“And that is the type of organization we have here,” Logan said. “Honestly, I wasn’t going to talk about that. My kids are OK. My wife is recovering well. She is OK. This happened all yesterday. And [coach Joe Judge] said, if you need to fly to Florida, don’t worry about football. That’s what Joe is as a man and as a coach.”

“I’ll do everything I can to play for a coach like that and an organization like this because if that wasn’t the case, I don’t know if I’d be here today,” he said. “And honestly, I’m extremely grateful for this organization and Joe and for everybody to understand things are bigger than football, especially this year.”

Ashley also voiced her gratitude for her husband’s support and ready-for-anything attitude.

“I’m so thankful for a husband who smiled at the potentially life changing news of an unexpected pregnancy and was on board and ready for the adventure even though it wasn’t in the plans,” Ashley said. “Logan’s support never wavers. His strength gives me strength, and our hearts are so aligned.”

AOC Claims She Is a ‘Planned Parenthood Baby’ During Defense of...