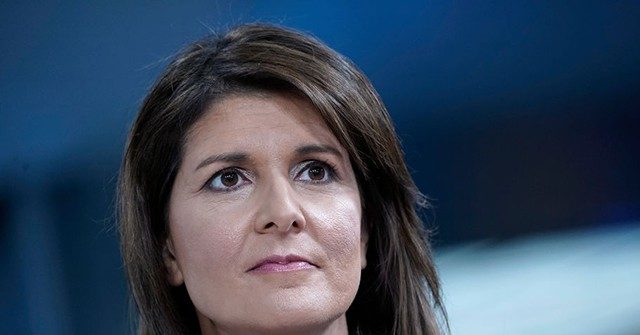 Former Ambassador to the United Nations Nikki Haley hit back at Twitter on Friday for flagging her tweet about election fraud while ignoring one casting doubt on the Holocaust by Iran’s Ayatollah.

According to a recent analysis by the New York Times, 34 percent of President Donald Trump’s tweets were labeled “disputed” since election day in an effort to lessen their spread across the social media platform.

From October 27 to Wednesday of this week, Twitter has labeled 300,000 tweets as “disputed,” warning readers that tweets could be misleading or false. Twitter restricted 456 of these messages preventing them from being shared or receiving likes or replies, an extreme measure applied to many of President Trump’s tweets.

“So, we drew some attention to it, and they did unblock it, but we’re still having difficulties going forward,” Gov. Kristi Noem (R-SD) explained during an interview on NewsmaxTV’s the Greg Kelly Show:

However, as Twitter ramped up its fact-checking and labeling, some users began mocking the site through parody posts, according to Breitbart News.

“Users were quick to ridicule Twitter by creating fake screenshots of fake fact-checks, implying that Twitter was being overly harsh in its labeling and questioning things that were clearly true,” the outlet said.

These are cracking me up. Are there more of these? pic.twitter.com/Oq3BeDHw3P