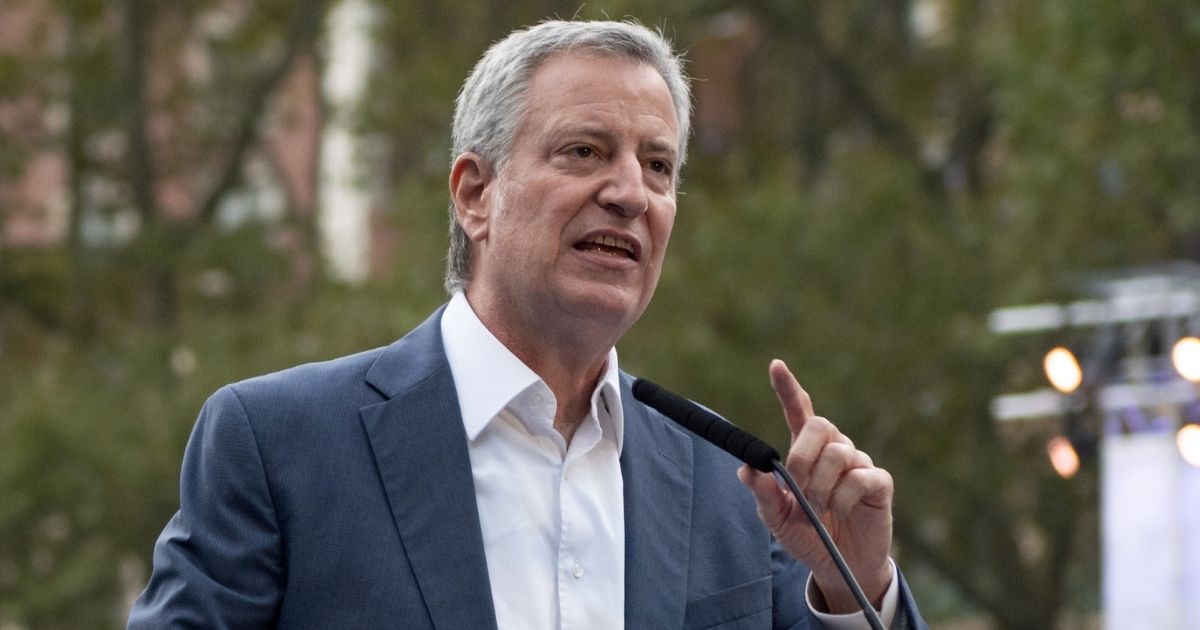 On Saturday, tens of thousands of New Yorkers took to the streets of the city, packed shoulder to shoulder, to celebrate the establishment media’s decision to call the presidential race for Democrat Joe Biden.

There were masks and it was outdoors. As we’ve been told before, this is supposed to mitigate the problems — even though plenty of these people no doubt had to get into packed subway cars, buses or Ubers on the way to or from the celebration.

The city’s restaurants are still operating, albeit at 25 percent capacity. Its schools are open — and doing a pretty good job of controlling transmission.

But don’t you have Thanksgiving dinner with your family or friends, or else New York will lose control of COVID-19.

That’s the takeaway from Mayor Bill de Blasio, who held a news conference Monday and told the residents of his city that they should avoid “big meals together.”

This wasn’t just about Thanksgiving, of course. Christmas and Hanukkah are right around the corner; while we often make the eight-day Jewish festival into a bigger holiday than it is, we shouldn’t forget the lascivious glee with which de Blasio has cracked down on his city’s Jewish community.

“One of the most crucial things that’ll happen in the next two months, of course, is the holidays, and the holidays we associate with travel and the holidays we associate with big indoor gatherings, big meals together — that, unfortunately, this year can’t be the case, because if you look at the numbers that we’re going to go over now, you’re going to see loud and clear we’re in a dangerous situation and we have to change our habits,” de Blasio said, according to a transcript of the news conference.

“We cannot take the risk of going back to larger shutdowns of our city, our economy, more and more restrictions. We cannot take that risk. We have to change what we do in light of this situation.”

Should New Yorkers not gather for Thanksgiving?

The mayor was later asked whether he planned “to take more aggressive actions, such as not allowing the Rockefeller Center Christmas Tree or making sure that any Thanksgiving-related gatherings do not take place.”

“We’re going to look at all that,” de Blasio responded.

According to The New York Times, 1,207 new cases were reported on Tuesday, along with two deaths. The 14-day changes in both cases and deaths were up 77 and 94 percent, respectively.

Positivity rates in the city are well over 2 percent right now, which is also troublesome.

“We see the presence of the coronavirus in this city and it’s trying to reassert itself,” de Blasio said.

“We need to do everything in our power to stop the coronavirus from reasserting in New York City. We have to stop a second wave from happening here, it is getting dangerously close.”

“We’re seeing household transmission,” he added. “We’re seeing community spread. We’re seeing things we have not seen in a long time — and we have to stop them.”

Nobody was stopping this, however:

Parades in DC and dancing to Bye Bye Bye in Times Square. We’ve more than earned this moment of joy. #PresidentElectBiden#Biden2020https://t.co/x0t0yHn7T2

For a NY-er like me, seeing the throngs in Times Square lifted my spirits, regardless of what they were celebrating. This area, where I used to work, has been a ghost-town for the past several months. To me it symbolized the possible end of the lockdowns.https://t.co/N2CBAg1AKV

However, there’s also more of a risk when people are shoulder-to-shoulder in Washington Square Park than there is with a small family gathering — and there’s the additional risk of delegitimizing government authority on the matter via insane attempts to influence people’s behavior like this.

But at least if we can gather outdoors safely to celebrate Joe Biden’s media-called victory, we can look forward to the Macy’s Thanksgiving Day Parade, right?