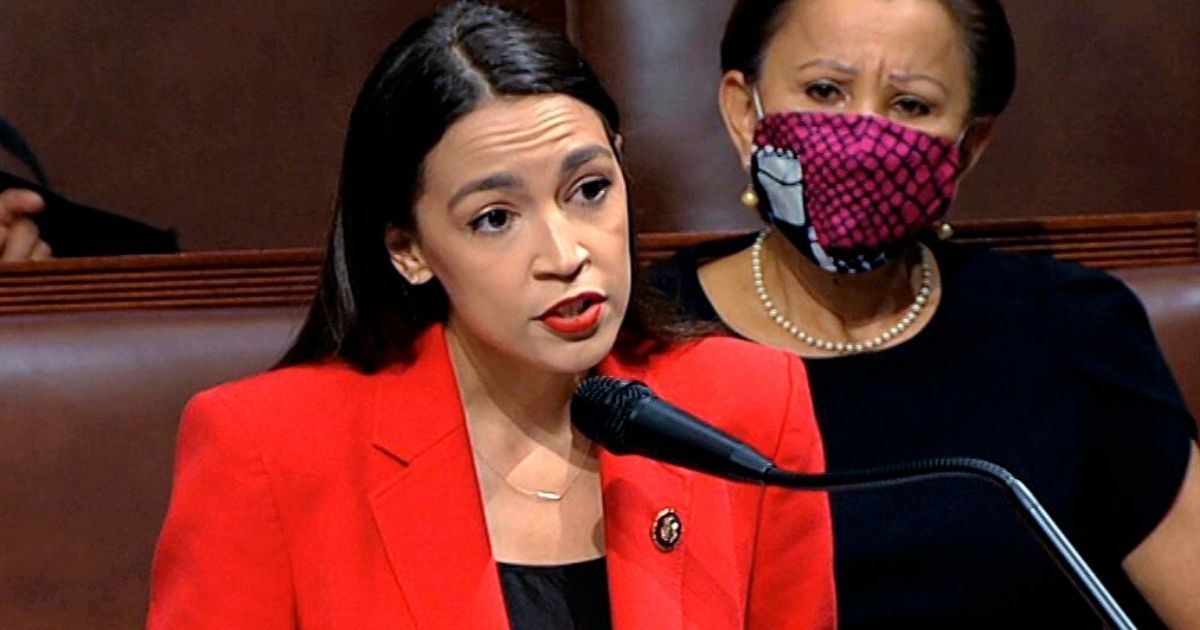 In her two years in the public spotlight, New York’s Rep. Alexandria Ocasio-Cortez has demonstrated a firm determination not to listen to reason when it comes from the right.

But the Democrat’s reaction Thursday to words uttered by a veteran member of her own party while votes were still being counted showed she won’t listen to the left either.

And it showed that Tuesday’s disappointing showing for down-ballot Democrats doesn’t look likely to deter the party’s ever more radical drift to the left.

In a Twitter post, Ocasio-Cortez got snarky with former Sen. Claire McCaskill, the Missouri Democrat who lost her seat in the Show-Me State in 2018, the year AOC won hers in the House.

During a panel discussion on MSNBC as the votes were coming in, McCaskill said Democrats and their leftist agenda had alienated American voters.

Claire McCaskill: “Whether you are talking guns or…abortion…or gay marriage and rights for ‘transexuals’ and other people who we as a party ‘look after’ and make sure they are treated fairly. As we circled the issues we left voters behind and Republicans dove in.” pic.twitter.com/bMh9JALAxg

While the presidential election pitting incumbent President Donald Trump and Democratic nominee Joe Bide remains undetermined, Democrats failed to both expand their majority in the House of Representatives (in fact, the party lost seats) or take control of the Senate, despite a massive fundraising advantage.

It was an unexpectedly poor performance, considering pre-election predictions that the party would increase seats in the House and might even retake the Senate.

Do you think Democrats will listen to Claire McCaskill?

In other words, American voters weren’t buying what Democrats are selling. And McCaskill is one of the few in the party who would point that out.

“I think it began around cultural issues,” McCaskill said during a panel discussion on MSNBC, citing gun rights, abortion and the party’s incessant bleating (not her words, obviously) over homosexual marriage and “transexual” issues.

“As we, you know, circled those issues, we left some voters behind and Republicans dove in with a vengeance and grabbed those voters. And you’ve seen this shift. You saw it in the South, I’ve seen it in the rural areas of my state.

It was a Democratic spin on defeat — Americans don’t want or need a government to “take care of their families” if the economy is humming as it was in the pre-COVID years of the Trump administration.

But there was an undeniable truth in McCaskill’s words — Democrats have left behind millions of Americans who don’t want to see their country transformed into some Bernie Sanders fever dream of a socialist utopia.

But since that nightmare is actually what AOC has been dreaming of since her bartending days, McCaskill’s analysis wasn’t welcome at all.

In tweet published Thursday, Ocasio-Cortez basically told McCaskill (and with her, millions of other putative Democrats) that the party had no place for her.

Why do we listen to people who lost elections as if they are experts in winning elections?

McCaskill tried her approach. She ran as a caravan-hysteria Dem& lost while grassroots organizers won progressive measures in MO. Her language here shows how she took her base for granted. https://t.co/ZnTXI59MW9

“Why do we listen to people who lost elections as if they are experts in winning elections?” she wrote.

“McCaskill tried her approach. She ran as a caravan-hysteria Dem& lost while grassroots organizers won progressive measures in MO. Her language here shows how she took her base for granted.”

It’s an ugly way to go on the warpath against an older woman and a fellow party member for simply speaking the truth. It’s also completely wrong.

What AOC apparently didn’t realize — or chose to ignore — is that “grassroots organizers” who won on progressive measures weren’t running in places like Missouri. And Missouri, it might shock the young congresswoman to know, looks a lot more like the rest of America than the liberal lunatic asylum in New York City that elected her to Congress.

More than a few social media users were ready to remind her, though. Even some liberals understand most Americans aren’t interested in a leftist America.

You won in a D+30 district, which you should have been able to do just by having a pulse.
McCaskill won twice in a red state. There’s somebody taking a base for granted here, and it isn’t her.

Right!! Winning in the Bronx is a little different than winning in Missouri! #AOC wouldn’t stand a chance in that state

You’ve won 2 races in a district where a lamppost with a (D) next to it’s name could win. Your smack talk is like you’re a kid who just won her intramural basketball league and says Charles Barkley isn’t good because he never won a championship like you did.

You’ve won 2 races in a district where a lamppost with a (D) next to it’s name could win. Your smack talk is like you’re a kid who just won her intramural basketball league and says Charles Barkley isn’t good because he never won a championship like you did.

It’s a solid bet that progressives like AOC will take exactly the wrong lesson from the results of Tuesday’s voting.

In the still-undecided race for the White House, President Donald Trump’s campaign wasn’t just battling the Democratic Party and its nominee Joe Biden. He was also fighting a mainstream media that abandoned even the pretense of fairness.

He was fighting an entertainment establishment that marched in lockstep to shove liberal positions down Americans’ throats.

He was fighting a NeverTrump wing of his own political party that had somehow reconciled itself to an eternity of playing the Washington Generals to the Democrats’ Harlem Globetrotters, as long as it didn’t involve Trump’s unabashed “America first” political philosophy or governing practice.

And he still wasn’t defeated on Election Day.

What happens in the ethical cesspools of Democratic-run states where the election is being decided is a different matter altogether, but as of Thursday, four more years of Trump’s aggressively American administration was a distinct possibility.

It’s the down-ballot races that are really telling. And in those, Republican Senate incumbents were overwhelmingly successful in retaining their seats. The Democratic Party, as of Thursday, retained its majority in the House, but with significantly weakened numbers.

Combined, the two results amount to a national rejection of the most radical elements of the Democratic agenda — Supreme Court “packing,” statehood for Washington, D.C., and Puerto Rico, assaults on the Second Amendment and the obscenity of the Green New Deal.

Coastal Democrats like AOC don’ want to hear it, but McCaskill was telling the truth — even in Democratic terms.

Democrats obsessed with race, abortion and the rights of men to dress like women aren’t in step with the American people.

But if Ocasio-Cortez won’t listen to Claire McCaskill, she isn’t going to listen to the rest of the country any time soon.

Tuesday’s results show the country isn’t interested in listening to her, either.