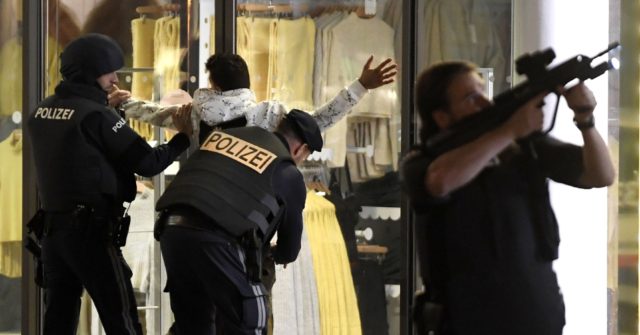 Police in the Austrian capital of Vienna launched a manhunt Monday evening after a synagogue in the city was attacked by one or more gunmen.

That there are multiple dead in Vienna tonight has been confirmed for the first time, reports Kurier, by the Viennese ambulance service who said there were “several dead and injured”. The service could not be more specific than that, they said, as “we are still in the process of getting an overview.”

Vienna’s police have also now confirmed some facts, including that there are now six separate “crime scenes” in the city, although whether that means six individual attacks it unclear. Nevertheless, the force also confirmed there are “several” suspects armed with rifles and that one person had died.

A police officers walk near ambulances at the scene after gunshots were heard, in Vienna, Monday, Nov. 2, 2020. Austrian police say several people have been injured and officers are out in force following gunfire in the capital Vienna. Initial reports that a synagogue was the target of an attack couldn’t immediately be confirmed. Austrian news agency APA quoted the country’s Interior Ministry saying one attacker has been killed and another could be on the run.(Photo/Ronald Zak) 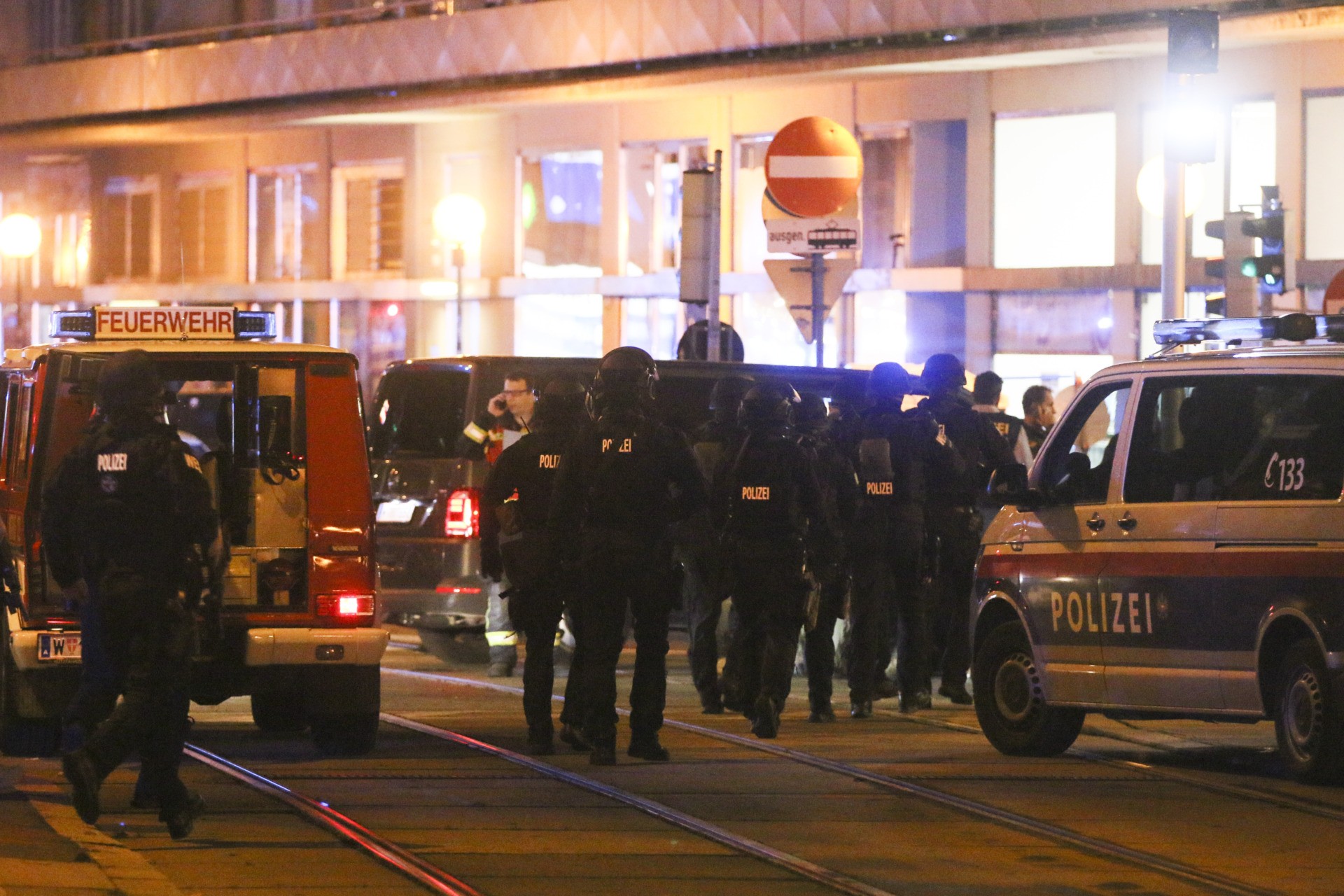 Police officers walk between emergency vehicles at the scene after gunshots were heard, in Vienna, Monday, Nov. 2, 2020. (Photo/Ronald Zak) 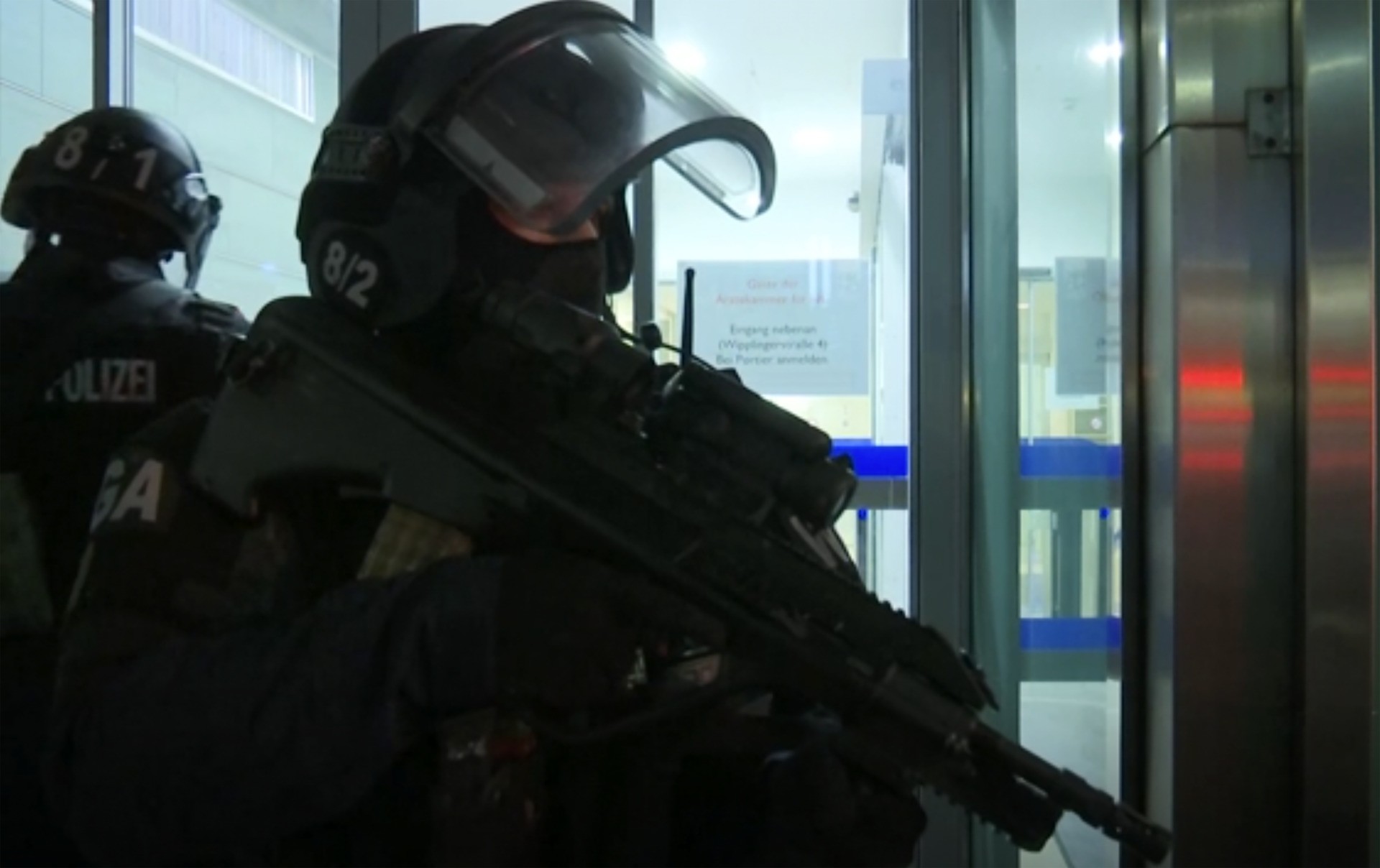 In this image made from video, police at the scene after gunshots were heard, in Vienna, Monday, Nov. 2, 2020.  (AP Photo)

Austria’s national public service broadcaster Österreichischer Rundfunk (ORF) reports the remarks of the nation’s interior minister Karl Nehammer, who has said the police are treating today’s incident as a terrorist attack with several perpetrators. Further details from the interior minister are that one attacker is dead, one has been arrested, and one police officer was been shot with a rifle.

Still no official confirmation on claimed fatalities, nor on claims swirling  — and reported by several Austrian newspapers — that the attack is, in fact, still ongoing. Kronen Zeitung reports that hostages have been taken in the city, potentially confirming that this is not an unsophisticated lone-wolf type attack, but could be a more complex Mumbai-style attack.

Exclusive video of the shooting from the first moments of the attack in Vienna, Austria#Vienna @BittonRosen pic.twitter.com/BDDHIcnTBK

An Austrian newspaper is reporting fatalities for the first time, with national newspaper Kurier stating as many as seven, including a police officer, may have been killed tonight. In addition, the paper claims, there are four others seriously injured. No motive is yet known for Monday’s attack, but it is claimed the synagogue the shooting took place outside was not open at the time. COnsequently, it is not exactly clear whether the synagogue was the target of the attack.

Photography service Getty Images has several images of the police operation underway in downtown Vienna. Kronen Zeitung reports an eyewitness who stated “at least 50” shots were fired. Furthermore, the newspaper claims, there may be several perpetrators on the run still. 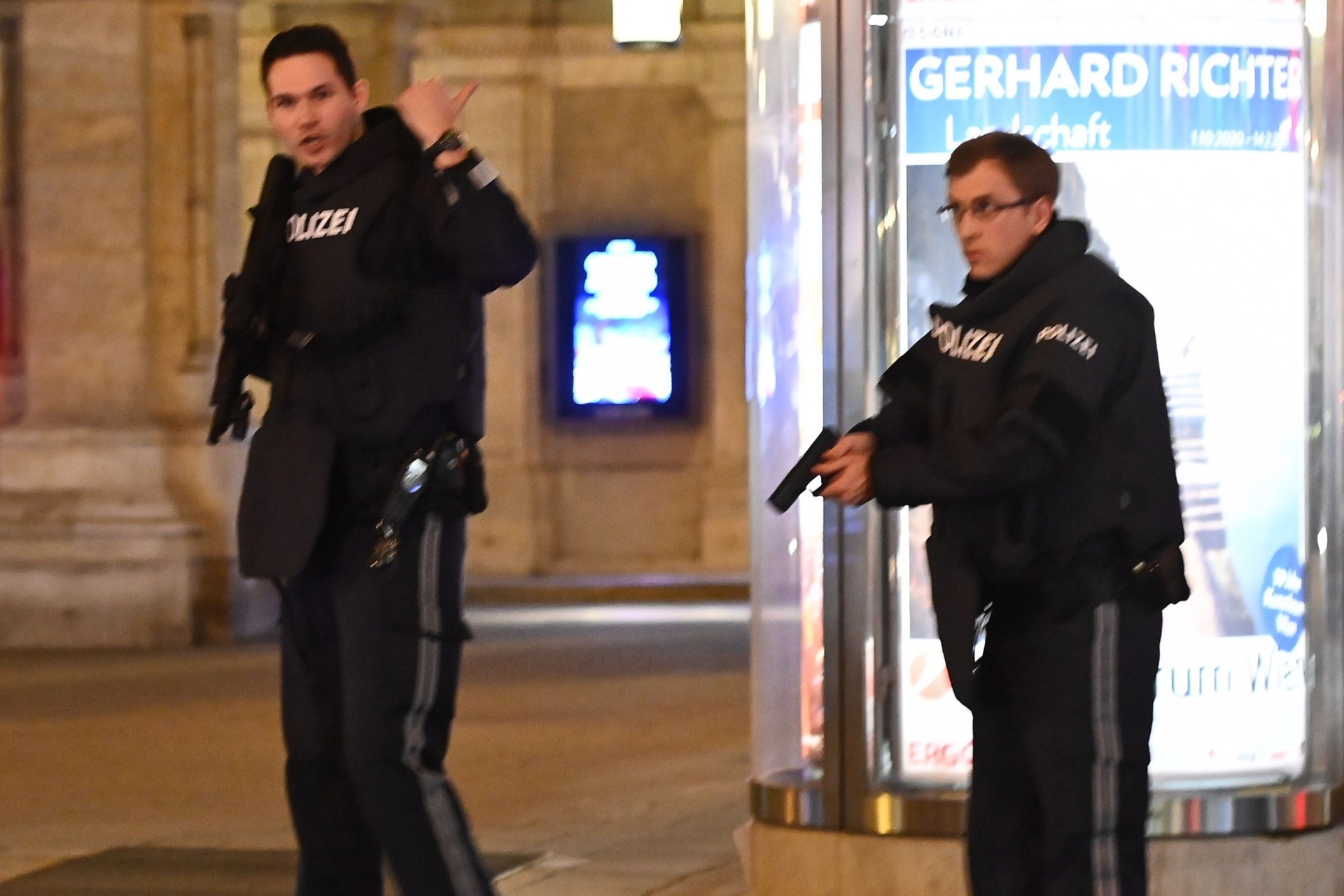 Armed Austrian policemen stop traffic from a pedestrian and shopping area in Vienna on November 2, 2020, after a shooting in the city centre. – Multiple gunshots were fired in central Vienna on Monday evening, police said, while media reported that there had been an attack close to a synagogue. One attacker was “dead” and another “on the run”, Austria’s interior ministry said according to news agency APA. (Photo by Joe Klamar / AFP) (Photo by JOE KLAMAR/AFP via Getty Images) 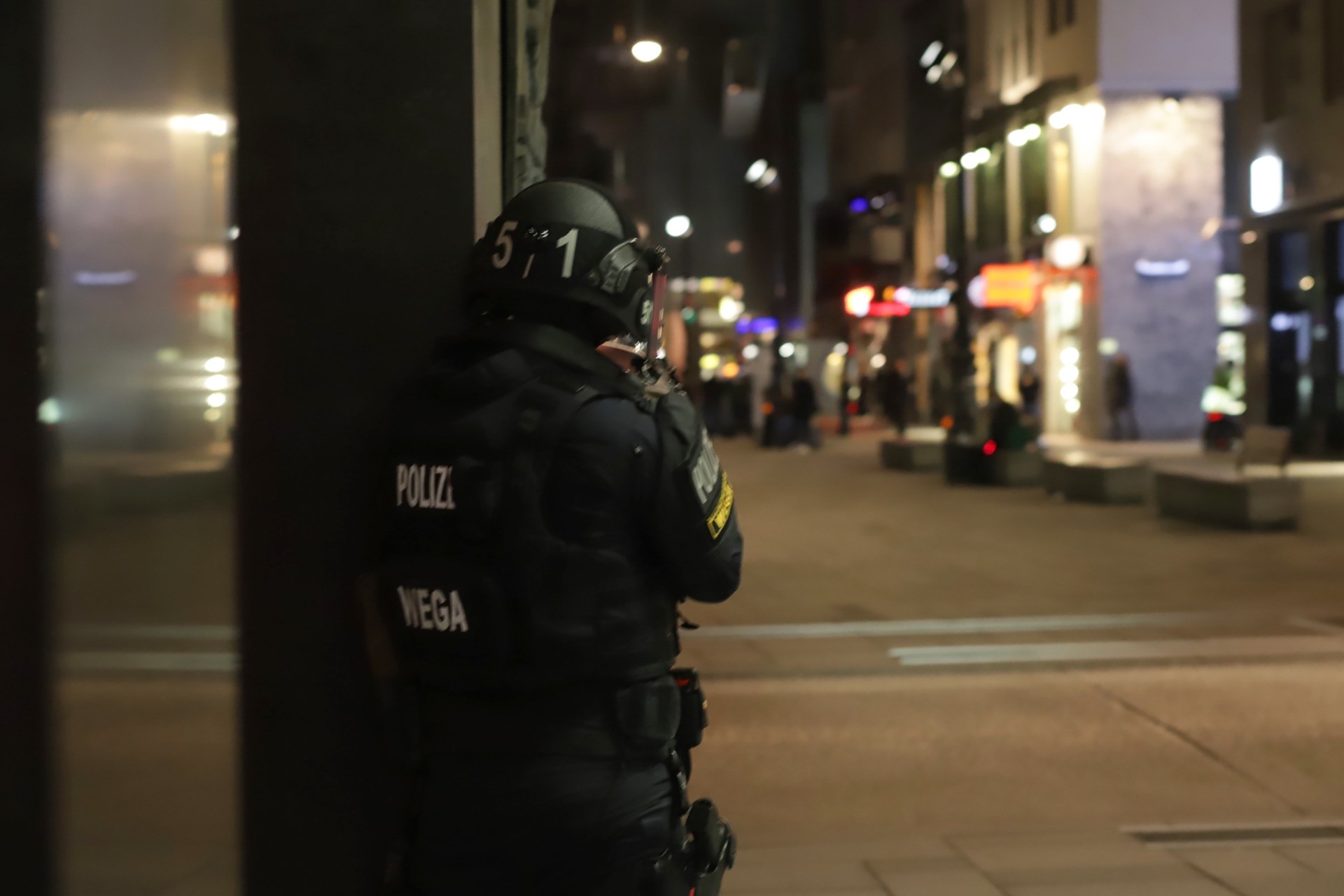 An Austrian policeman overlooks an area in Vienna on November 2, 2020, after a shooting in the city centre. (Photo by ALEX HALADA/AFP via Getty Images) 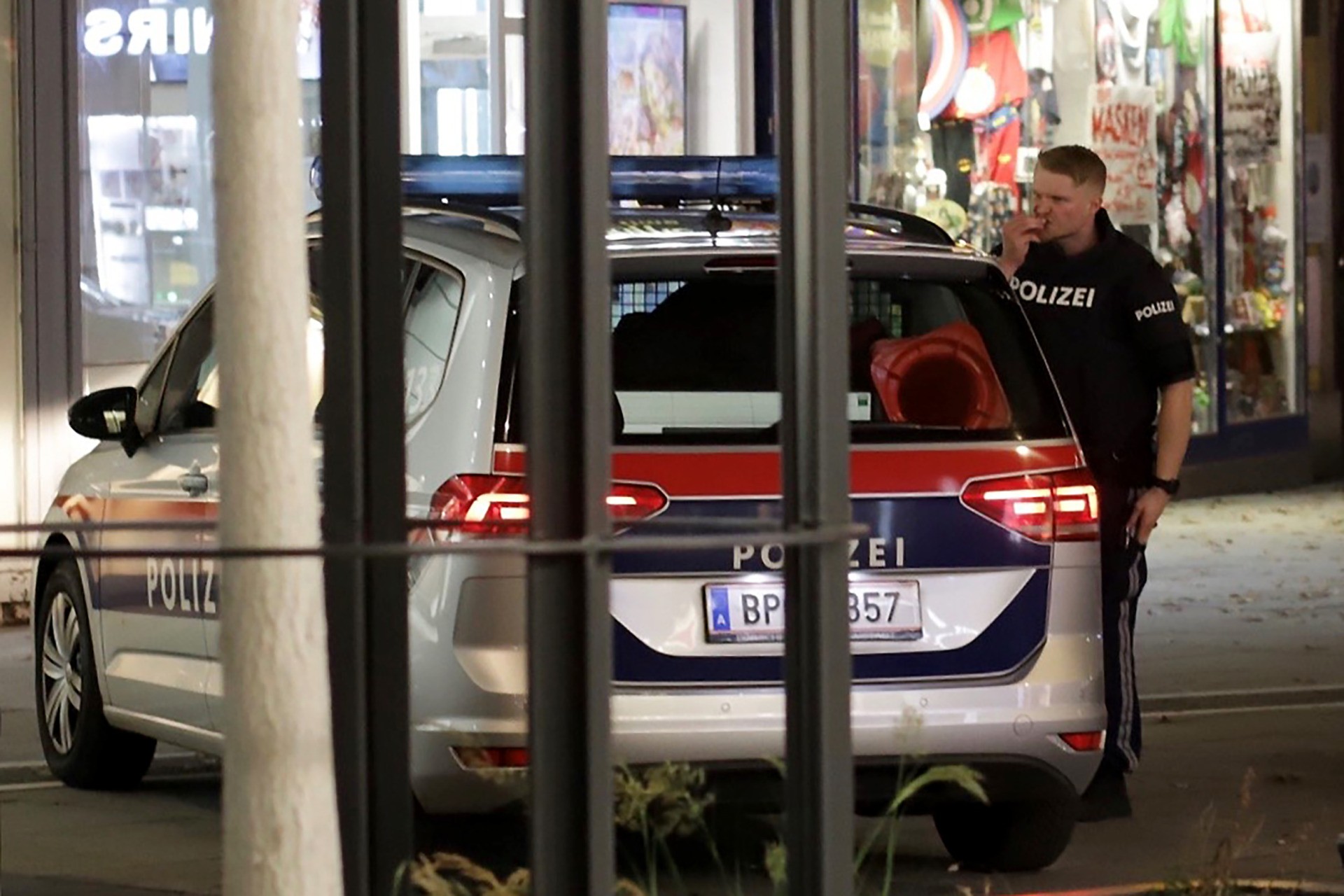 Police patrol at the Rotenturmstrasse near a synague in central Vienna on November 2, 2020, following a shooting. (Photo by ALES HALADA/AFP via Getty Images) 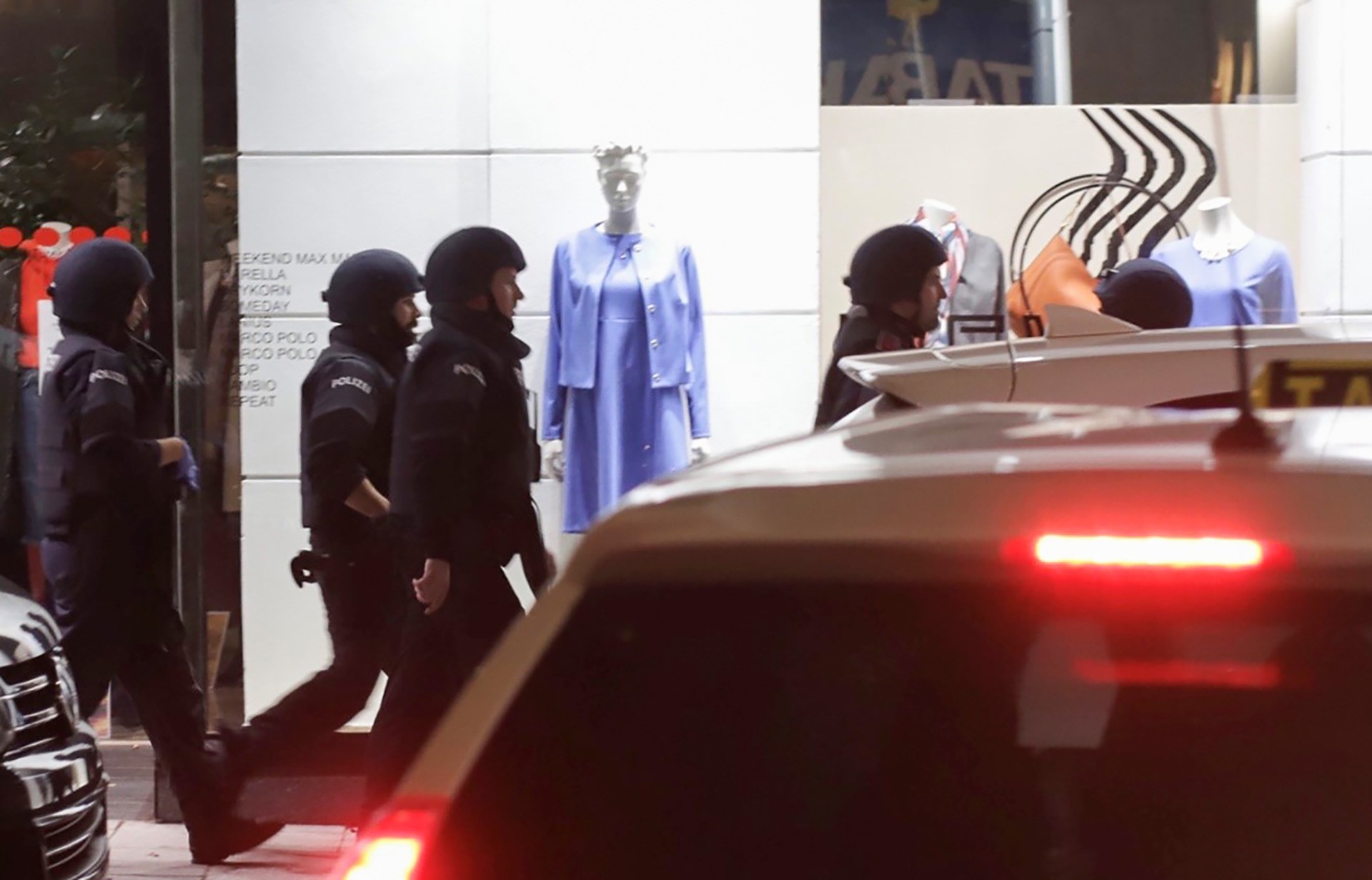 Police patrol near the Rotenturmstrasse near a synague in central Vienna on November 2, 2020, following a shooting. (Photo by ALES HALADA/AFP via Getty Images)

Police have confirmed there are several injured tonight in Vienna. Meanwhile, Israeli public broadcaster journalist Amichai Stein has shared footage alleging to show one of the attackers — out of a claimed three — running and shooting with a long gun.

3 suspects are said to have been involved in the attacks in Vienna https://t.co/WvViy6nR0T

The original story continues below…

Officers responded to an attack on a synagogue on the Seitenstettengasse in Vienna’s downtown first district Monday night. Best-selling Austrian newspaper Kronen Zeitung reports an officer who had been guarding the synagogue — common practice in European cities where antisemitism is on the rise — had been shot and is in critical condition.

Several Austrian newspapers also state that an assailant blew himself up at the scene of the attack, and others may be at large, although city police have not yet confirmed details beyond that a major incident operation is underway, shots had been fired, and there were injured people at the scene.

A social media video circulating and shared by Austrian mainstream media — confirmed to show Vienna’s Schwedenplatz by Breitbart London — shows police vehicles while gunshots can be heard in the background.

VIDEO: Latest emerging from Vienna. Reports, unconfirmed of attacks on multiple locations, at least one person killed and a manhunt to find multiple attackers pic.twitter.com/BB64c0qllN

This story is developing. More follows…

COVID Vaccines: No, the Biden Team Is Not Starting ‘from Scratch’ on Distribution

COVID Vaccines: No, the Biden Team Is Not Starting ‘from Scratch’...