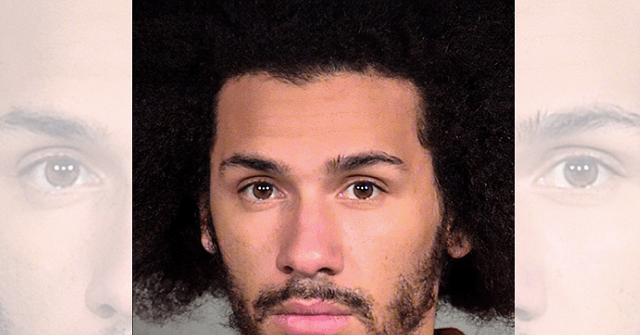 An Oregon court sentenced a BLM activist to 20 months in prison after he pleaded guilty to kicking a dazed man in the face. Video captured the moment when he kicked the man after others pulled him from a crashed car, assaulted him, and shoved him to the ground during an August BLM protest.

A court in Portland, Oregon, sentenced Marquise Lee Love, 26, to 20 months in state prison and an additional 36 months of probation after he pleaded guilty to assaulting a man during a BLM protest on August 17, KGW8 reported.

The conviction and sentencing follow a vicious attack on a man who had been pulled from his crashed pickup truck, assaulted, and pushed to the ground by people wearing “security” vests. The man crashed his truck into a tree after attempting to escape other BLM protesters, Breitbart News reported.

A video tweeted by journalist Andy Ngo shows Love running up to the victim from across the street while he sat stunned on the street. He then kicks the victim in the face — knocking him unconscious.

This is the moment immediately before. The mob assaults him and makes him sit in the ground while they search his belongings. When he stands up, they brutally beat him. #PortlandRiots #antifa #BlackLivesMatter Video by @livesmattershow pic.twitter.com/tEzpIz6V9U

Earlier: Rioters stand over the unconscious man’s body after they beat him. They pour water on him and shout in support of Black Lives Matter. Antifa street medics are examining him. He’s not responsive. #PortlandRiots #BlackLiveMatter Video @FromKalen. pic.twitter.com/aI5emSRATI

Breaking: Marquise Lee Love, the Portland BLM activist who kicked Adam Haner in the face at a protest, pleaded guilty to third-degree assault & felony riot. He has been sentenced to 20 months in prison. pic.twitter.com/kb23IsT806

I believe this is the first rioter in Portland to be sentenced to prison time out of nearly 1,000 cases this year. If it weren’t for the undercover filming by @livesmattershow & @FromKalen, the assault would not have been documented. Portland journalists actually look other way.

Animal Rights Extremists Will Be Greeted by Private Security on Fed-Up...