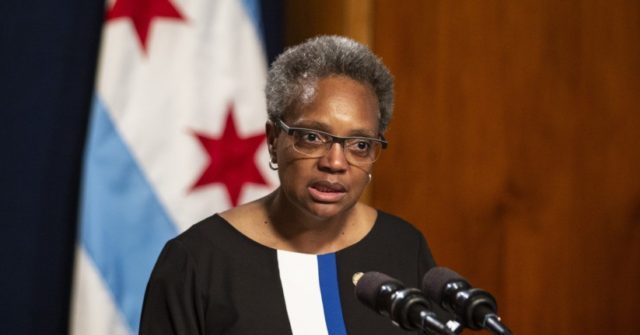 Over 20 people were shot, one fatally, across another tragically violent weekend in Mayor Lori Lightfoot’s (D) Chicago.

CBS 2 reports “at least 20 people had been shot” by 10:14 p.m. Sunday night. By Monday morning ABC 7 / Chicago Sun-Times reported the number of shooting victims had risen to 22.

The one fatality of the weekend occurred at 8:05 p.m. Friday, when 28-year-old February Burage was shot while walking on the sidewalk “in the 5600-block of West Madison Street.” He was transported to a hospital and pronounced dead.

NBC 5 reports that a 14-year-old girl was among the weekend’s wounded. She was one of three individuals shot Sunday night around 9 p.m. at the Astronaut Flee dance studio.

Police are not sure if there was a single shooter or multiple gunmen, but shots were fired into the studio from outside and the 14-year-old and two adults were wounded.

The girl was transported to the hospital in “fair condition,” while the adults were both in “serious condition.”

On November 13, 2020, Breitbart News reported there had been nearly 100 expressway shootings already this year in Lightfoot’s Chicago.

The shootings left behind 62 victims, six of who succumbed to their wounds.

AWR Hawkins is an award-winning Second Amendment columnist for Breitbart News and the writer/curator of Down Range with AWR Hawkins, a weekly newsletter focused on all things Second Amendment, also for Breitbart News. He is the political analyst for Armed American Radio. Follow him on Twitter: @AWRHawkins. Reach him at [email protected]. You can sign up to get Down Range at breitbart.com/downrange.