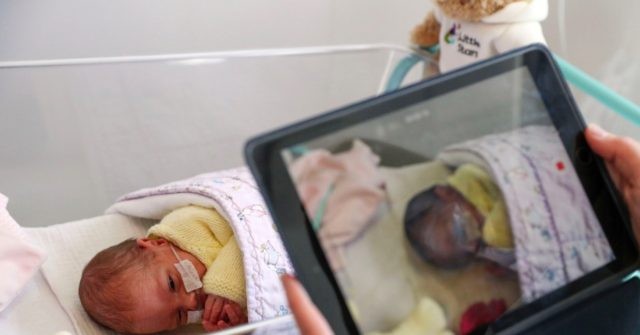 Parents of sick newborn babies are being barred from seeing their children in hospitals run by Britain’s socialised healthcare system, the National Health Service (NHS), due to the draconian coronavirus restrictions in place in the UK.

A survey conducted by Bliss, a premature infant charity, found that 14 per cent of parents with sick babies have been prevented from staying with their ailing child as a result of social distancing measures put in place by hospitals.

Some hospitals have limited visiting time to just two hours a day, and others have limited visits to one parent per day. The study found that the draconian limits have placed an increased strain on the mental health of new parents across the country.

Carly Maclean, 30, and her partner Gary Hanson told the Daily Mail that only one parent was allowed to see their daughter, Emily, who suffered from jaundice, forcing her to be placed onto an oxygen machine at the Royal Bolton Hospital in March.

“When you’re peering at your poorly baby, the only thing that can help is the gentle comfort of your partner and the knowledge you’re not alone. Covid took that away,” Maclean said.

“And when I brought Emily home after nine days, it felt like someone else’s child because the restrictions stopped that bond. It destroys a part of you,” the mother added.

Another mother, Katie Orger, 33,  said that The Rosie Hospital in Cambridge told her that she had to “book a slot” to visit her daughter, Sophia, who was born five weeks early in April.

“I never managed to breastfeed, and I can only put that down to not having the skin-to-skin and lasting contact with my daughter,” Orger said.

While parents of sick newborns in the UK have been typically afforded 24-hour access to special care baby units, NHS trusts have been introducing limits on “visitors” during the China coronavirus pandemic.

Guidance from national healthcare bodies such as the Royal College of Paediatrics and Child Health have said that “visitors” should not include the parents of the child; however, this has not been followed by all hospitals.

Bliss demanded that NHS England publish national guidance for hospitals to ensure that parents are granted unfettered access to their children “as a matter of urgency”.

The chief executive of the newborn charity, Caroline Lee-Davey, said: “Our smallest and sickest babies need their parents at their side to give them the best chance of survival, even during a pandemic.”

The British socialised healthcare system has also seen significant failures in providing care for children, with the Royal College of Paediatrics and Child Health admitting in October that hospitals postponed some 50,000 child surgeries between just March and May in England.

Recent figures released in the Health Services Journal also revealed that the number of stillbirths in England between April and June nearly doubled in England, with hospitals recording 40 compared to 24 during the same period last year.

The report pointed to the message of “Protect the NHS” as a contributing factor in mothers deciding not to seek care earlier.