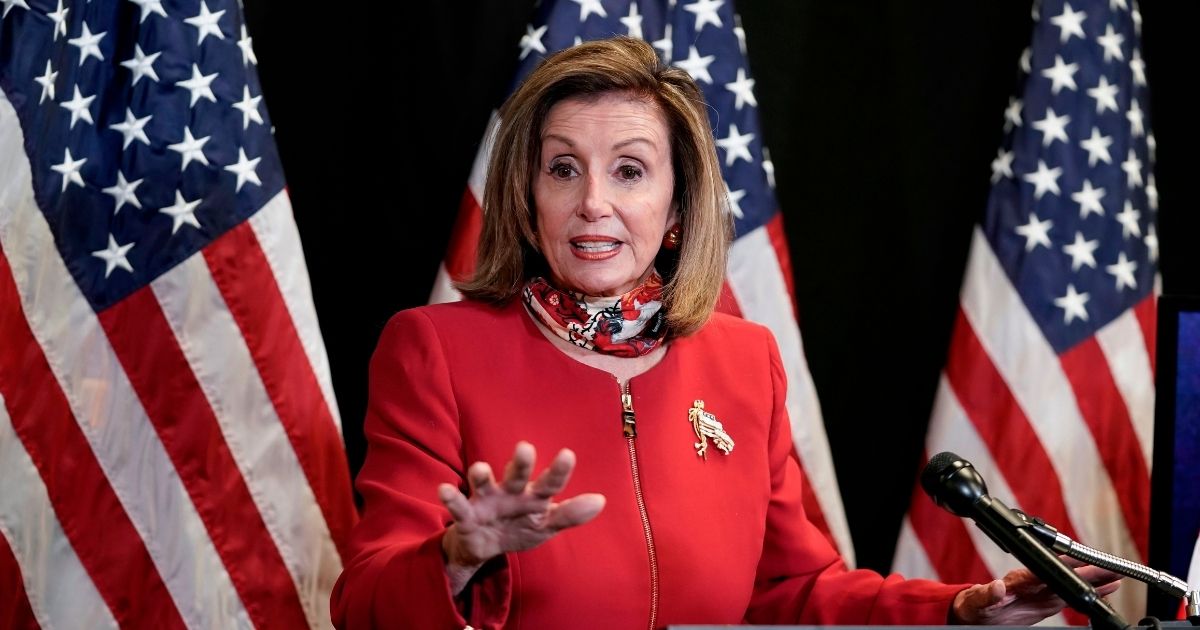 House Speaker Nancy Pelosi sent personalized letters to fellow Congressional Democrats on Thursday asking for their backing in re-electing her to the speaker position.

Although a winner had not been declared as of Friday afternoon in the presidential race between President Donald Trump and former Vice President Joe Biden, Pelosi referred to Biden as the “president-elect” in a letter obtained by Politico.

“I am writing to request your support to be re-elected as Speaker,” Pelosi wrote. “I do so with the utmost respect for the diverse viewpoints of our Democratic Caucus, the gravity of this role and the urgency of the challenges ahead.”

She asserted voters picked Democrats “up and down the ballot with a resounding and a remarkable mandate for progress and healing.”

“Working together with President-elect Joe Biden and Vice President-elect Kamala Harris, the Democratic House will be ready on Day One to advance extraordinary change For The People,” she continued.

Pelosi claimed votes were cast for Democrats to “crush the coronavirus and safely reopen schools and the economy.”

“With a Democratic president, a Democratic House and Democrats in the Senate, it is imperative that we enact initiatives to make the economy fairer — ending wealth and health disparities,” Pelosi added.

Pelosi also criticized Trump and Senate Republicans for their “act of supreme desperation by jamming through a Supreme Court justice, after 60 million Americans had already voted.”

Do you think Nancy Pelosi should be re-elected as House Speaker?

She said the Democratic majority must prepare to “reverse the damage of a radical Republican court and remedy what they will do to undermine justice in health, financial security, policing, human rights and equality.”

CBS News reported Friday that the letter came after several Democratic caucus members lashed out at Pelosi on a conference call Thursday.

Democrats also said Republicans were able to connect those moderates to “‘socialism’ because of the party’s more left-wing members.”

“I think that the Democratic party needs to clearly push that we are not supportive of ideas like socialism or defunding the police or anti-Semitism,” Rep. Stephanie Murphy of Florida told the Associated Press.

New York’s Rep. Alexandria Ocasio-Cortez, known for her often leftist stances, argued Friday that campaign failures occurred because “almost all had awful execution on digital during a pandemic.”

She also claimed Democratic incumbents who supported initiatives like the New Green Deal were re-elected.

There are folks running around on TV blaming progressivism for Dem underperformance.

I was curious, so I decided to open the hood on struggling campaigns of candidates who are blaming progressives for their problems.

Almost all had awful execution on digital. DURING A PANDEMIC.

So the whole “progressivism is bad” argument just doesn’t have any compelling evidence that I’ve seen.

There are swing seat Dem incumbents who cosponsored the Green New Deal, Medicare for All, etc and if I’m not mistaken every single one won re-election.

“Our message from day one was that the Democrats’ radical socialist agenda is a threat to middle-class Americans,” Republican Rep. Tom Emmer of Minnesota told the AP.

Rep. Cheri Bustos, who chairs the Democratic Congressional Campaign Committee, said during the call that the DCCC would do a “deep dive” into what happened in the House, according to CBS News.