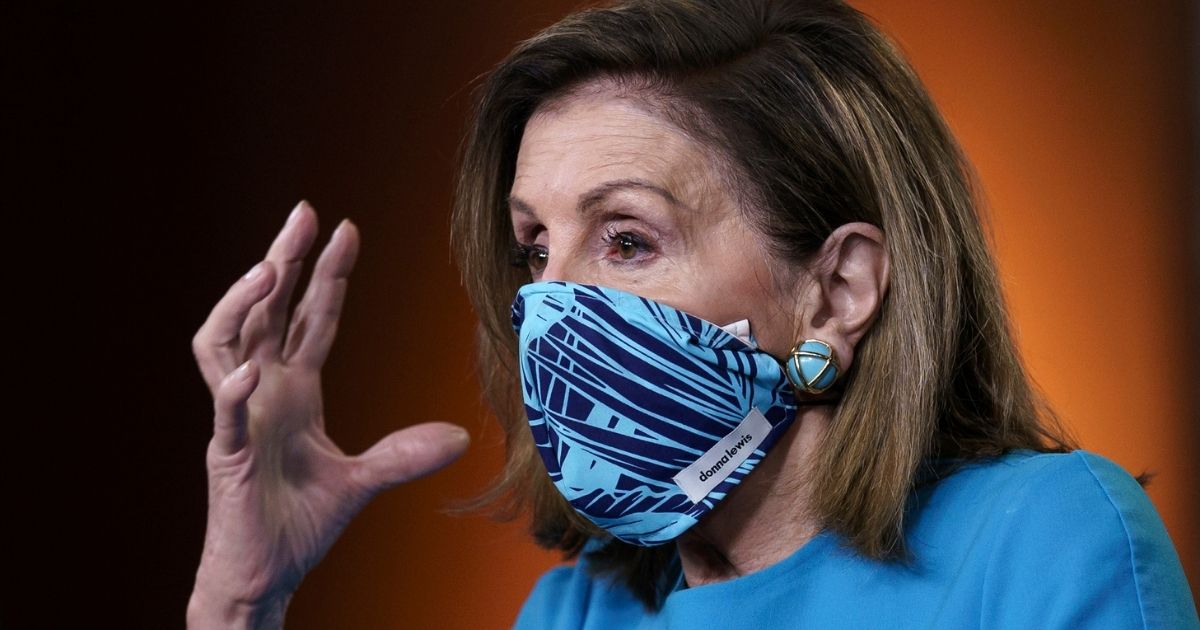 House Speaker Nancy Pelosi intends to push an “election reform” bill that would help her party stay in power and make future elections look a lot like the current contested presidential race if it became law.

In a letter sent to Democratic colleagues in the House last week, Pelosi vowed to prioritize passing H.R. 1 “on the first day of the new Congress.”

In a copy of the letter obtained by Politico, the California Democrat asked for support for another term as speaker and laid out plans for the 117th Congress.

“Our vision for the next two years must be built on the success of Democratic House Majority in the 116th Congress, and to harness the extraordinary visions, values and vibrancy of our Caucus to secure the progress that the American people deserve,” Pelosi wrote.

She quickly invoked her desire to pass H.R. 1, which she said would “remove barriers to the ballot box so that the American people can make their voices heard.”

A closer look at the bill, which Democrats in the House passed in 2019, shows it would permanently and radically transform how elections would be conducted.

The House passed the legislation, also known as the “For the People Act of 2019,” last March, but the bill was not taken up by the Republican-controlled Senate.

A summary of the bill says it addresses “voter access, election integrity, election security, political spending, and ethics for the three branches of government.”

The legislation would expand “voter registration and voting access” and limit “removing voters from voter rolls.”

Do you think the goal of the Democrats’ “election reform” bill is to make it easier for them to win elections?

But those measures are merely the tip of the iceberg.

“The bill provides for states to establish independent, nonpartisan redistricting commissions,” the summary says. It also “sets forth provisions related to election security, including sharing intelligence information with state election officials, protecting the security of the voter rolls, supporting states in securing their election systems, developing a national strategy to protect the security and integrity of U.S. democratic institutions, establishing in the legislative branch the National Commission to Protect United States Democratic Institutions, and other provisions to improve the cybersecurity of election systems.”

The legislation makes dozens of mentions of increasing the use of absentee ballots through the mail, making the proposal a year before the coronavirus pandemic gave the party’s state-level officials a pretext to flood the 2020 election with mail-in ballots.

We have all seen how that ended up.

While the bill wasn’t passed last year, if Georgia’s two Senate runoff races don’t go the GOP’s way in January, the Democrats could succeed in their plans to shroud future elections in chaos.

Pelosi said she intends to make passing the bill a priority for day one.

A Republican Senate majority presumably would be the only obstacle between the House Democrats’ bill forever undermining election integrity, should Joe Biden be declared the winner of the presidential election.

H.R. 1 would essentially federalize elections, give felons full voting rights, throw up roadblocks to discovering examples of double voting and require states to offer free mail-in ballots, among other provisions.

In essence, future elections would resemble the current presidential race, which has arguably diminished trust between millions of voters and the election system as examples of reported irregularities in battleground states continue to come to light.

“Democrats always planned to use mail-in ballots to sway this election. That’s why they intro’d & passed HR1 (their #1 priority) when Pelosi took House majority in early 2019 (long before pandemic),” he said.

Added Banks, “If it had passed every state election would look like PA, WI and MI right now!!”

Democrats always planned to use mail-in ballots to sway this election. That’s why they intro’d & passed HR1 (their #1 priority) when Pelosi took House majority in early 2019 (long before pandemic). If it had passed every state election would look like PA, WI and MI right now!!

The legislation never made it out of the House, but Democrats are itching to move it forward on the first day of the 117th Congress.

The only thing stopping the implementation of Pelosi’s “election reform” is the fate of the Senate, it seems.

That’s assuming, of course, that President Donald Trump is unsuccessful in his fight to challenge voting irregularities in several states, which he contends, with mounting evidence, could have cost him the election.

Pending a negative outcome in Georgia for Republicans in January, the country soon could find itself at the mercy of a party that would use its authority to permanently restructure how elections are conducted, and those changes would obviously benefit only Democrats.

They don’t care about election integrity.

If they did, they’d support auditing the votes in every battleground state starting today, and H.R. 1 would be a bill pushing for a national voter ID law.

The “For the People Act of 2019″ and all future versions of the bill are about nothing more than relegating the GOP to an also-ran minority party.

Inside the Beltway: The media’s dogged devotion to Biden