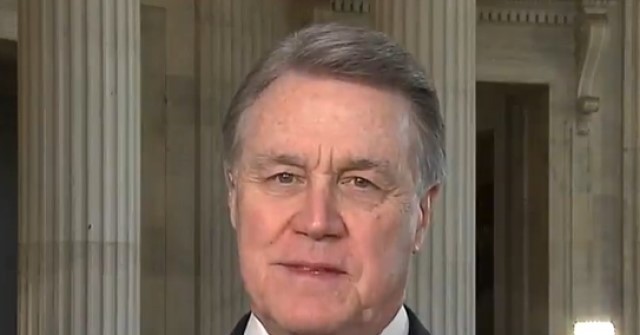 Tuesday on Fox News Channel’s “Hannity,” Sen. David Perdue (R-GA) discussed his re-election bid against Democrat Jon Ossoff, noting the odd timing over the holiday season but warning what might happen if he and his Georgia colleague Sen. Kelly Loeffler (R-GA) loses her bid, as well.

Perdue offered a list of consequences if Republicans fall short on January 5.

“[T]his is an unusual nine-week runoff, but it’s very clear,” he explained. “You just have to listen to what Chuck Schumer said, and you showed it night after night. Take Georgia, change America. You just heard a clip about AOC not wanting to compromise and negotiate. And what Chuck Schumer will do is change the voting rule to where he can do anything he wants with 51 votes, and with 50 in the Senate, and plus the vice president if they get there. They will have the majority, and they’ll add two states, four Democratic seats. They’ll stack the court. They’ll absolutely try to change the Electoral College.”

“And this is what I see coming,” Perdue continued. “Defund the police is only the start of it. They want illegal immigrants to vote. Stacey Abrams just said that a couple of weeks ago. They want us to cut our military again, which is what Obama did and what Clinton did. But I really think the people in Georgia have awakened to this fraud, this absolute hypocrisy of the Democrats are trying to perpetrate here because they won’t defend any of these policies that are in the Democratic platform. We are seeing this all over the state, Sean. We’re going around the state, and people are outraged. And what we need to do is make sure they get out and vote. If they want to help us, go to PerdueSenate.com and help us out. This is a fight for a lifetime. We’re the last line of defense here in Georgia.”

We Deserve To Be The Best, Biological Males Are Taking It Away

Why Is the Vaccine Backlog Increasing Again?

Our Man in Winston-Salem | The American Conservative

We Deserve To Be The Best, Biological Males Are Taking It...