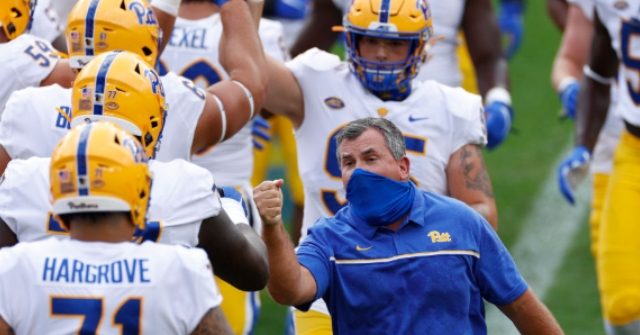 Players for the Pittsburgh Panthers and Virginia Tech Hokies will be wearing masks Saturday even while playing on the field, thanks to a new coronavirus restriction handed down by the State of Pennsylvania, ESPN reported.

In a statement issued on Friday, the University of Pittsburgh said, “In alignment with the recent guidance from state officials regarding the current health climate, Pitt’s football team will be appropriately outfitted for Saturday’s game with face coverings to use on the field and sideline. This is being communicated to Virginia Tech’s sports medicine staff as well.”

Virginia Tech confirmed that they, too, would observe the mandate and force players to wear masks both on the sidelines and on the field.

The mandate was released by the Pennsylvania secretary of health this week, saying, “Coaches, athletes, and spectators must wear face coverings while actively engaged in workouts and competition as well as when on the sidelines, in the dugout, etc. unless they meet an exception in the Face Covering Order.

“Section 3 of the Order provides an exception that allows an individual to remove their mask if wearing a face covering would either cause a medical condition or exacerbate an existing one, including respiratory issues that impede breathing, a mental health condition or a disability,” the order continued.

“The Order indicates all alternatives to wearing a face covering, including the use of a face shield, should be exhausted before an individual is excepted from this Order,” the state’s warning noted.

Saturday’s game will mark the first time college teams have been forced to wear masks while playing on the field.

Patriots Call Lib Mayor’s Bluff, Show up in Force and Dare Him To Follow Through with Threat