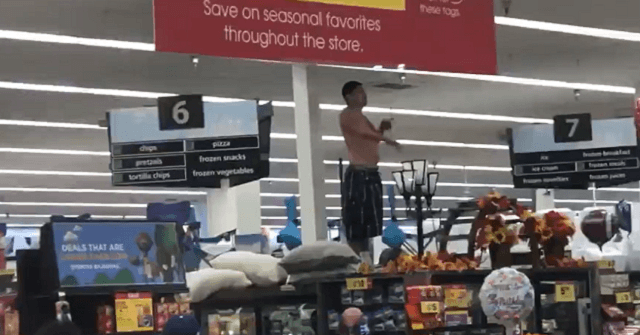 An encounter with a man believed to be homeless led to a police officer being injured during an exchange of gunfire. The incident took place in a suburban Los Angeles grocery store after the man reportedly entered and danced on top of a freezer while threatening shoppers with a handgun.

The video shows multiple police officers entering the store but stops before the shooting took place. Audio from inside the store cannot be heard in the video.

“Witnesses told NBC4 the man fell through the ceiling and was standing on a freezer, pointing a gun at people inside,” NBC7 reported.

Officers determined the man was indeed armed and attempted to talk him down, ABC7 reported. At some point shots were fired and an officer was struck by gunfire. At this point, it is not clear who shot the officer.

“They did determine that he was armed,” LAPD Commander Alan Hamilton told the local ABC News affiliate. “There was a confrontation with the officers and an officer-involved shooting occurred.”

The man managed to escape from the store despite the presence of multiple police officers. Police caught up with him at a nearby ARCO station. Additional officers arrived and the suspect surrendered after about a 40-minute standoff.

Police found a gun at the ARCO station.

The officer and the suspect were both transported to hospitals. The officer was treated and released after treatment of his injured hand, Police Chief Michel Moore tweeted.

Bob Price serves as associate editor and senior news contributor for the Breitbart Texas-Border team. He is an original member of the Breitbart Texas team. Price is a regular panelist on Fox 26 Houston’s What’s Your Point? Sunday-morning talk show. Follow him on Twitter @BobPriceBBTX and Facebook.