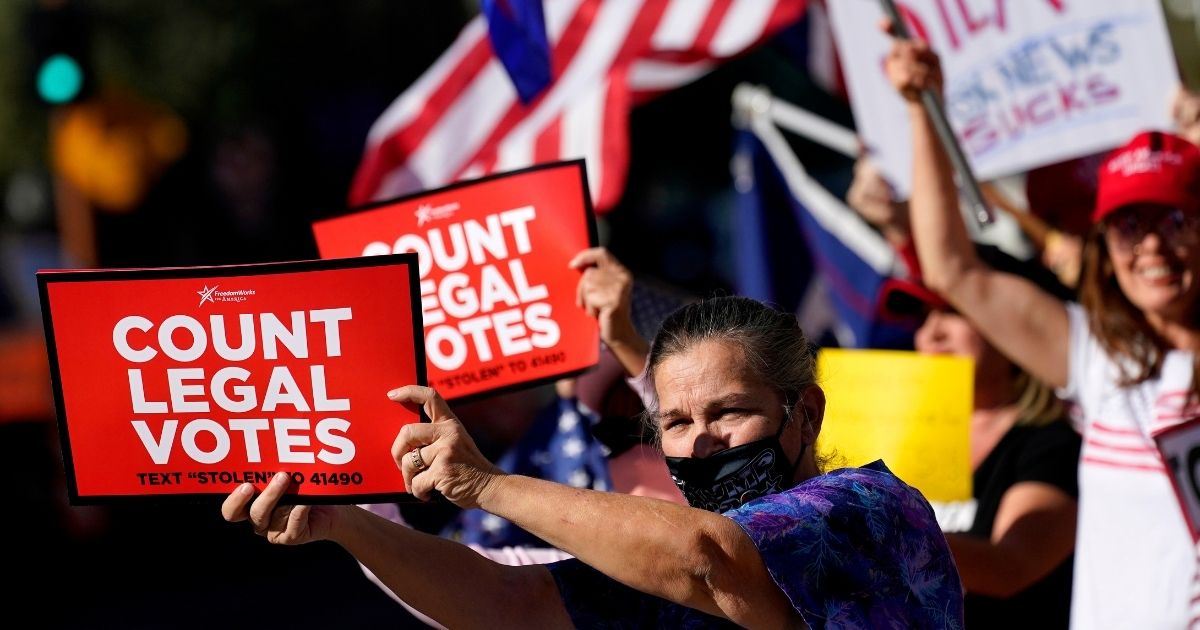 Hundreds of pro-President Donald Trump protesters gathering outside of the Maricopa County Recorder’s Office on Wednesday night and could be heard chanting “count those votes.”

Some protesters “attempted to get inside the Recorders Office. A couple of people were able to get inside at one point and asked questions about the vote count before being asked to leave,” according to the news outlet.

Where is the violence? https://t.co/YoG4HYebF8

Fox News and The Associated Press have called Arizona, with its 11 Electoral College votes, for Democrat Joe Biden, but other news organizations have not as counting continues in the Grand Canyon State.

The Arizona Republican Party urged Fox News on Wednesday to retract its call of the race.

Dial 888-369-4762 (Press 3) and tell them to retract the call! #StopTheSteal #ProtectYourVote pic.twitter.com/rxWx0pmAbp

Biden’s lead over Trump narrowed in Arizona to approximately 68,000 votes after counting concluded on Wednesday.

The president carried the state in 2016, beating Hillary Clinton by about 91,000 votes.

CNN noted that the ballots, many of which were cast close to or dropped off at polling places on Election Day, are trending for Trump at a pace that, if it continues, would allow him to overtake Biden.

Who would’ve predicted @CNN would be ahead of @FoxNews! https://t.co/dnJ5wztXs0

Anyone awake for good news?

President @realDonaldTrump continues to chip away at his AZ ballot deficit!

Hundreds of thousands of votes remain outstanding. President Trump is on track to take the lead & win Arizona’s 11 electoral votes!

The Associated Press reported that as of Thursday, there were still about 450,000 ballots yet to be counted.

The news organization is continuing to monitor the Arizona race, but so far is standing by its call of the contest for Biden. Sally Buzbee, the AP’s executive editor, added, “We will follow the facts in all cases.”

Good morning! As planned our team started at 7:30 a.m. to continue counting #GeneralElection ballots. You can watch our 24 hour livestream at https://t.co/q5XN3h8GYS. (Be sure to enable flash on your computer.) We will release today’s results at 7 p.m. at https://t.co/iARFPkoxOB. pic.twitter.com/tWZ4YjhSG7

Maricopa County reported having approximately 275,000 ballots left to count as of Thursday morning. It plans to release its next batch of results at 7 p.m. Mountain Time.