Around 300 people participated in a “Trick or Trump” Halloween Fortnite tournament hosted by Bryson Gray and Gamers for Trump on Saturday afternoon.

Over 400 people registered for the tournament, organizer Stephanie Lien D’Urso told the Daily Caller News Foundation. Gray told the first-place squad “dankline” that to receive their winnings of $2,000 that they needed to send in video or photo proof from one team member that they were supporters of President Donald Trump.

“I am not sending money to anybody unless I have video proof that you are a Trump supporter,” Gray said during the live stream. “I refuse to give someone money who isn’t a Trump supporter, that just defeats the purpose.”

We had a blast! Next tournament Trump Victory G4T Tourney???@RealBrysonGray ROCKED it!!

D’Urso told Gray during the live stream that the rules did not stipulate that players had to support Trump in order to win the competition and that the tournament was open to gamers of all political affiliations. Gray said they should make changes to the rules for the next event.

“I did invite everyone to join and compete. They just had to stay respectful and watch their language. I did not require that participants be Trump supporters. The more people we can bring together in a positive way, the better. Our country needs unity right now,” D’Urso told the DCNF.

“Leftists” flooded a Google form submission created for people to register for the tournament, Gray said during the live stream. Nearly 2,000 responses included messages like “fuck Trump” and “fuck bigotry,” according to Gray.

“We had our share of ‘trolls,'” D’Urso told the DCNF. “I gave everyone fair warning to play nicely in the sandbox and behave. If they chose not to honor that, they were banned.” (RELATED: ‘Trick Or Trump’ Halloween Fortnite Tournament Organized To Encourage Conservative Gamers)

People watching the live stream through Twitch were able to participate in a live-chat monitored by Gray. “Bryson there’s a bunch of kids in the server who hate trump but doing it for the money,” aceayx wrote. 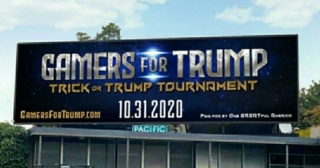 “They gonna win and donate it to sleepy Joe’s campaign,” aceayx wrote. “We can’t risk giving the money to a Biden supporter or homosexual! Give the money to Jaden and Nick,” volitil wrote.

“Trump ain’t ever called anyone chumps … he should though,” a player on Gray’s squad said during the live stream.

Content created by The Daily Caller News Foundation is available without charge to any eligible news publisher that can provide a large audience. For licensing opportunities of our original content, please contact [email protected].

In ‘Masterful’ Move, Mississippi Petitions Supreme Court for the Big One, And Leftists Are Furious

In ‘Masterful’ Move, Mississippi Petitions Supreme Court for the Big One,...