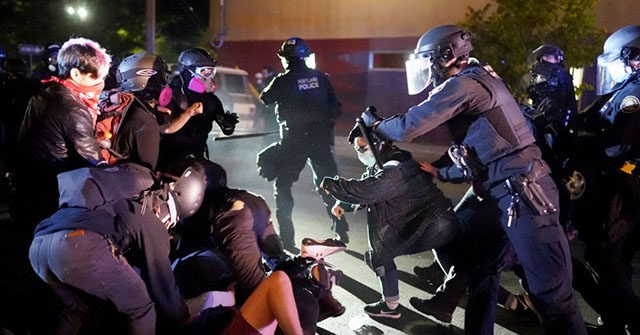 A group of masked protesters in Portland, Oregon, tried to intimidate a local female journalist and her crew as they recorded protests in the city.

In a video shared by Brenna Kelly from Fox12 in Portland, a group of protesters can be seen attempting to break the windows of a Starbucks. Another person appeared to be vandalizing an ATM machine. The video captured the moment when some of the protesters approached Kelly and her team shouting numerous expletives and telling them to stop recording.

Protesters just tried to break windows of Starbucks then began vandalizing ATM. We’re here to document this event but it’s clear they don’t want to be filmed. @fox12oregon pic.twitter.com/IuxaaRsimB

The reporter later claimed that visibly shaken store employees inside the Starbucks tried to make sure the doors were locked as the protesters moved through.

There were a few workers inside at the time, running to the doors making sure they were locked. @fox12oregon https://t.co/3lTOpxaCmD

Despite the obvious acts of vandalism and criminal actions, city officials had not declared the gathering unlawful and were allowing the protesters to keep marching.

Not declared an unlawful assembly yet from what I can tell. They warn: do not engage in criminal activity. @fox12oregon pic.twitter.com/szEddTmvmB

Biden’s plan for minimum wage and tips would harm waiters and...