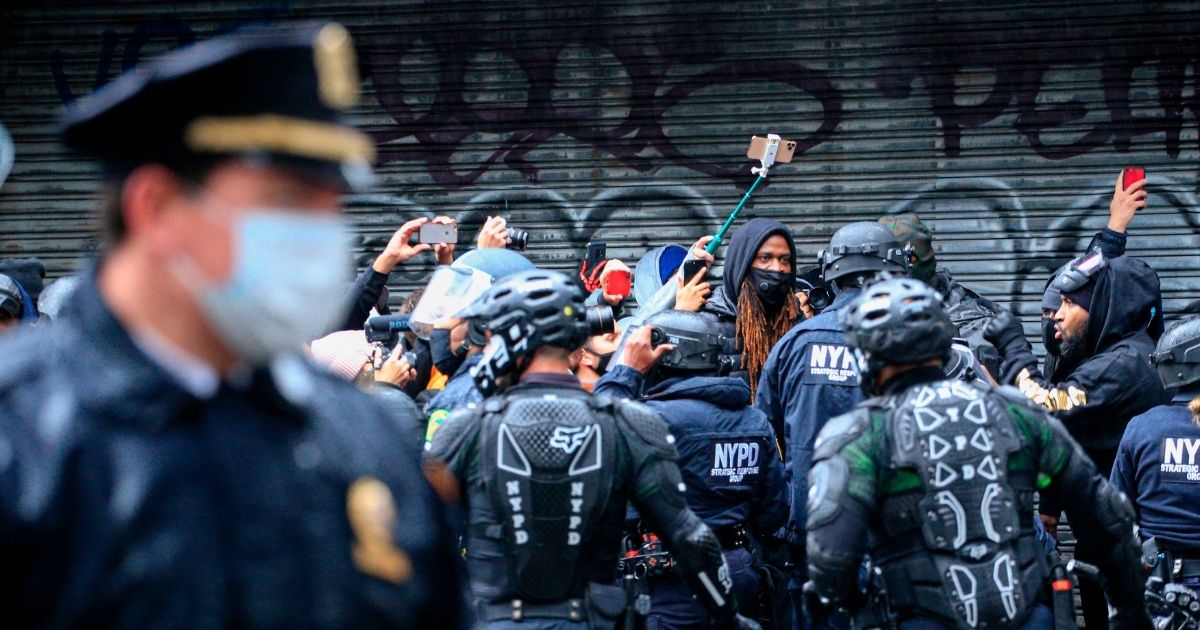 A man in New York City was arrested for allegedly attempting to strangle a police officer with a metal chain during election-related protests on Thursday.

In what you can assume the mainstream media would probably classify as a mostly peaceful alleged attempt at killing a cop, the NYPD reported how a man attacked one of New York’s finest.

“Tonight, while performing their duties near Bond St & Broadway in Manhattan, an officer was pushed to the ground & had this chain pressed against his throat,” NYPD News tweeted.

“The suspect was apprehended & will be charged with assault, criminal possession of a weapon & attempted strangulation.”

Tonight, while performing their duties near Bond St & Broadway in Manhattan, an officer was pushed to the ground & had this chain pressed against his throat. The suspect was apprehended & will be charged with assault, criminal possession of a weapon & attempted strangulation. pic.twitter.com/QuWAosMAAP

In a follow-up tweet, the NYPD noted, “Violence – in any form – is unacceptable. We will be reviewing this incident, and bring any additional perpetrators to justice.”

Violence – in any form – is unacceptable. We will be reviewing this incident, and bring any additional perpetrators to justice.

The city’s Democratic leadership has made it a priority to turn alleged violent criminals loose, despite some alleged crimes being violent.

The result is people accused of heinous crimes being back on the street in a day or so.

With the presidential election contested, it also wouldn’t be a stretch to speculate that the alleged chain attacker could be right back out on the streets for more protests.

Do you think the left’s political violence will continue if Biden is declared the winner of the election?

Elected Democrats in the city, such as Mayor Bill de Blasio, have a penchant for fomenting chaos — which is probably why the alleged attacker wasn’t charged with attempted murder.

Why keep him in custody when he can be useful for spreading more unrest?

WNYW-TV reported that the attack occurred when a group of demonstrators upset that the presidential race has not yet been called gathered for a “We Choose Freedom” rally.

The group also chanted slogans such as “all cops are bad.”

But the anti-cop language and attempted strangling are not to sum up the leftists’ rally, which was deemed peaceful.

WNYW noted, “While there were some scuffles, police said Thursday’s clash was nothing like the trash fires and bottle tossing that marred a peaceful march in the city on Wednesday.”

In what world is an event which included “trash fires” and “scuffles” a peaceful march?

Only in the world of the media that is still trying to convince us that violent gatherings of leftists are part of a legitimate movement, apparently.

At least a dozen arrests were made Thursday, while more than 50 were made in New York City Wednesday.

All of them were related to the mostly peaceful protesting of the election.

Despite the appearance of nationwide election funny business with ballots in favor of Democratic presidential hopeful Joe Biden, and the fact that the media is salivating at the moment it can call the race for him, the leftists’ street agitates are still not content.

It appears as if their political movement might snatch a victory from those who voted in favor of law and order during Tuesday’s voting, yet they are still resorting to the violence Democrats and the media have allowed to become normalized.