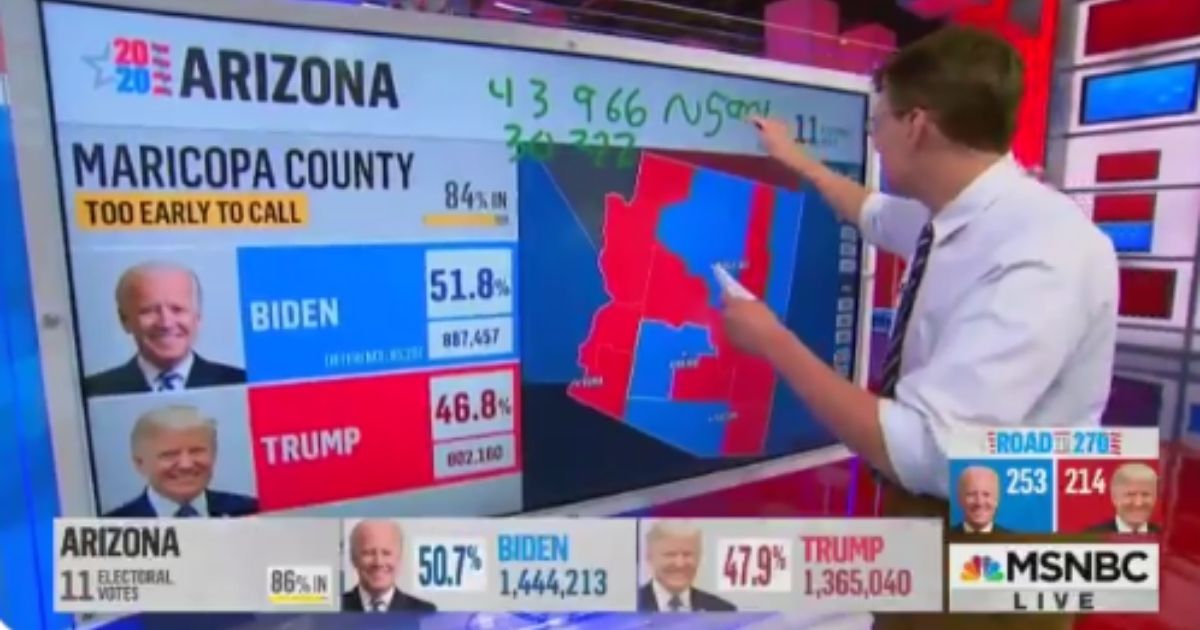 MSNBC host Rachel Maddow sounded both disheartened and alarmed to learn that President Donald Trump might yet pull out a win in Arizona.

Of course a victory in the Grand Canyon State would make it much easier for Trump to win re-election.

While Fox News and The Associated Press have called the Arizona race for Democrat Joe Biden, other major news outlets have not, knowing there are hundreds of thousands of votes yet to be counted.

There is good reason they are not, as MSNBC national political correspondent Steve Kornacki explained to Maddow on Wednesday night after Arizona’s most populous county, Maricopa, released about 75,000 of the approximately 400,000 votes that were still to come at that point.

Kornacki explained that Arizona had three of what he described as “buckets” to process for the election.

First came the early votes, in which Biden jumped to 10-point lead over Trump. Then came the votes cast on Election Day, which Trump carried by 26 percentage points, Kornacki said.

Now Maricopa County is in the midst of counting a third batch made up primarily of ballots dropped off at polling places on Election Day or early ballots that arrived in the days immediately before it.

Approximately 59 percent of these ballots were breaking for Trump, Kornacki said, to which Maddow gasped, “Oh God. That’s crazy.”

“This pace of 59 percent for Trump, it might change as more ballots are added into here,” Kornacki added, seeming to want to reassure Maddow.

CNN noted Wednesday that if the current trend continues, Trump would “at least meet” and perhaps beat Biden’s lead.

Who would’ve predicted @CNN would be ahead of @FoxNews! https://t.co/dnJ5wztXs0

As of early Thursday evening, Biden had a roughly 59,000 vote lead over the president, down from 92,817 on Wednesday before Maricopa County added new totals later that day.

The Associated Press reported that as of Thursday, Arizona had about 450,000 ballots yet to be counted.

The county planned to release its next batch at 7 p.m. Mountain Time.

Good morning! As planned our team started at 7:30 a.m. to continue counting #GeneralElection ballots. You can watch our 24 hour livestream at https://t.co/q5XN3h8GYS. (Be sure to enable flash on your computer.) We will release today’s results at 7 p.m. at https://t.co/iARFPkoxOB. pic.twitter.com/tWZ4YjhSG7

It will be fun to see if the Trump trend continues.