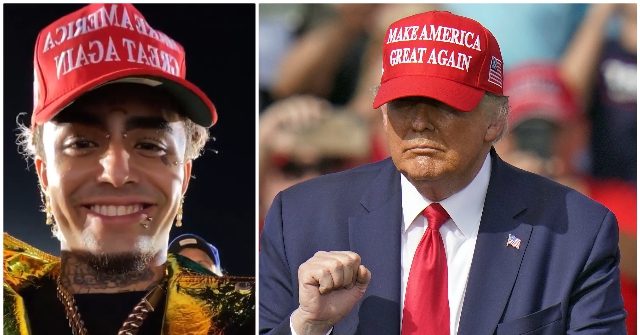 Rapper and staunch Trump supporter Lil Pump took to Twitter on Wednesday and told his 1.1 million followers to “remain patient” as the 2020 election results slowly trickle in, adding that “our man will be re-elected.”

“Remain calm. Remain patient. Have trust in the system. Our man will be re-elected. #Trump202020 ESSKEETIT @realDonaldTrump,” tweeted Lil Pump, who included a photo of himself speaking at a Michigan Trump rally on the eve of Election Day.

Remain calm. Remain patient. Have trust in the system. Our man will be re-elected. #Trump202020 🇺🇸 ESSKEETIT @realDonaldTrump pic.twitter.com/8nCmZL9mrf

The rapper endorsed President Trump last month in a brief but boisterous video on Instagram. “All I gotta say is Trump 2020 bitch,” said Lil Pump in his video endorsement. “Fuck I look like paying an extra 33 in tax for Biden, bitch ass nigga. Fuck sleepy Joe. Trump 2020 bitch.”

Lil Pump’s endorsement of President Trump did not stop there, as the rapper went on to become a strong public supporter of the president in the final week leading up to the election, posting photos and videos of himself on Instagram with MAGA gear.

On Sunday, the rapper attended President Trump’s rally in Miami, Florida, just days after publicly endorsing the president’s bid for re-election. In a video posted to social media, the rapper appeared to be standing near the front of the audience, close to the stage, wearing a “Make America Great Again” hat.

Pump has become one of Trump's most vocal supporters, and infamously said “F**k Sleepy Joe” a few days ago. pic.twitter.com/RUXI2VDwMt

“MAGA 202020,” wrote Lil Pump Monday on Instagram, alongside a photo of himself posing with a giant “Make America Great Again” flag.

On Monday, President Trump welcomed the rapper on the stage of his final campaign rally in Grand Rapids, Michigan.

“I come here to say Mr. President, I appreciate everything you’ve done for our country, you brought the troops home, and you’re doing the right thing,” proclaimed Lil Pump on the stage. “MAGA 202020, don’t forget that! And do not vote for Sleepy Joe AT ALL!”