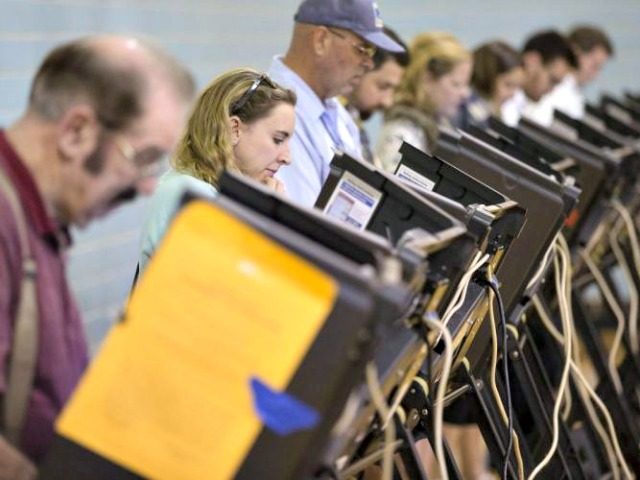 Researchers have questioned the reliability of new voting machines that state and local officials have rushed to implement at their polling locations ahead of the 2020 presidential election.

“Some of the most popular ballot-marking machines, made by Election Systems & Software and Dominion Voting Systems, register votes in bar codes that the human eye cannot decipher,” according to a February report by Associated Press.

But according to researchers, that’s a problem, as “voters could end up with printouts that accurately spell out the names of the candidates they picked, but, because of a hack, the bar codes do not reflect those choices.”

“Because the bar codes are what’s tabulated, voters would never know that their ballots benefited another candidate,” the report adds.

State and local officials had reportedly rushed to replace old voting systems with the new software ahead of the 2020 presidential election out of fear of “unreliable electronic voting machines” in the wake of so-called “Russia’s interference in the 2016 U.S. presidential race.”

But instead of using hand-marked paper ballots — which are most resistant to tampering due to the fact that paper cannot be hacked — many have opted out for technology that computer security experts believe to be nearly as risky as the older electronic systems.

Election Systems & Software disagrees, insisting that the security and accuracy of the company’s ballot-marking machines “have been proven through thousands of hours of testing and tens of thousands of successful elections,” according to a company spokesperson, Katina Granger.

Nonetheless, critics see the machines as vulnerable to hacking and noted that tinkerers at last year’s DefCon hacker convention in Las Vegas were able to “hack two older ballot-marking devices” in less than eight hours.

“There are a huge number of reasons to reject today’s ballot-marking devices — except for limited use as assistive devices for those unable to mark a paper ballot themselves,” said Doug Jones, a University of Iowa computer scientist.

The report added that Jones is one of many experts who believe that today’s ballot-marking machines undermine the concept of keeping a paper record that can be used in audits and recounts.

Several counties in both Michigan and Georgia have reported encountering what election officials described as a “glitch” involving their voting machines during the 2020 presidential election.

Dominion Voting Systems election software was implemented in all of Georgia’s counties for the first time this year.

“Georgia’s new electronic voting system is vulnerable to cyberattacks that could undermine public confidence, create chaos at the polls or even manipulate the results on Election Day,” reported the Atlanta Journal-Constitution (AJC) in October.

The report added that computer scientists, voting-rights activists, U.S. intelligence agencies and a federal judge have continuously warned of security deficiencies in Georgia’s system, but state officials have dismissed their concerns.

An investigation by AJC also determined that Secretary of State Brad Raffensperger’s office weakened the system’s defenses by disabling password protections on a key component that controls who is allowed to vote.

Officials tell voters to verify their selections on a paper ballot before feeding it into an optical scanner. But the scanner doesn’t record the text that voters see; rather, it reads an unencrypted quick response, or QR, barcode that is indecipherable to the human eye. Either by tampering with individual voting machines or by infiltrating the state’s central elections server, hackers could systematically alter the barcodes to change votes.

Such a manipulation could not be detected without an audit after the election.

The new voting system “presents serious security vulnerability and operational issues” caused by “fundamental deficits and exposure,” U.S. District Judge Amy Totenberg wrote in a recent order, in which she criticized state officials for not taking the problems more seriously.

“These risks,” Totenberg wrote, “are neither hypothetical nor remote under the current circumstances.”

The report added that Texas rejected Dominion Voting Systems, saying its inspectors encountered “multiple hardware issues” and could not certify that it was “safe from fraudulent or unauthorized manipulation.”

Dominion disagrees with these findings, stating that multiple large local governments across the country — such Cook County, Illinois, which includes Chicago, and San Francisco and San Diego counties in California — have purchased their system.

U.S. intelligence agencies, however, have warned that such systems can be targets of foreign governments trying to disrupt elections.