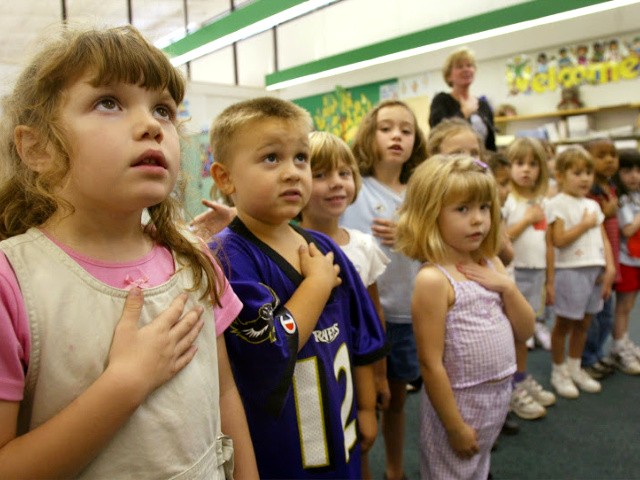 A national parents’ coalition that rose out of the uprising against the Common Core standards asserts the decades-long indoctrination of U.S. students in revisionist history has led to the current battle over the presidential election.

“The battle over who will be president continues,” US Parents Involved in Education (USPIE) said in comments to Breitbart News. “One of the reasons this battle is happening is because one party is working hard to re-write history to convince Americans that our country is bad and does not deserve the peace and prosperity we enjoy. The 1619 Project is a current and significant example.”

The New York Times’ revisionist 1619 Project reframes the nation’s history with the claim America was founded on slavery and racism when the first slaves arrived in Virginia.

USPIE noted as well a report at New American Magazine that cited the Times’ portrayal of Fidel Castro in the late 1950’s as a communist “freedom fighter” was essential to the dictator’s ability to enslave the nation of Cuba.

“And now, it seems, the far-left newspaper and the forces behind it hope that lies about America in the “1619 Project” will destroy the freest and most prosperous nation in human history,” the parents’ organization stated. “Fortunately, the lies were caught early, and they are now sparking outrage and scrutiny nationwide.”

USPIE elaborated that, with the 1619 Project claim that racism, slavery, systemic oppression, and other evils are embedded in America’s founding, “there can be no change in policy and no possible transformation that would make the nation redeemable.”

“In short, under the view put forth by the Times and its project, the only possible conclusion is that America must die so that something new can replace it,” USPIE said. “That is the objective. And now, The 1619 Project is being taught in our public schools!”

The parents observed that critical race theory is now “the new lens through which every subject must be viewed.”

“A new school policy in Virginia is even mandating that the history of slavery be taught in kindergarten,” USPIE noted. “Are you outraged? We are and that is why we are producing a new documentary titled Truth and Lies in American Education.

The documentary will address as well the sexualization of children through comprehensive sex education curricula often spearheaded by leftwing organizations such as Planned Parenthood and LGBTQ-activist groups:

The parents’ organization said it is very pleased to see President Donald Trump pushing back against the 1619 project, as well as “government schools falsehoods and omission of truths about our country’s founding and its struggles as a new nation.”

USPIE noted about its film:

Two of the experts interviewed in the film wrote books about how history has been shamefully high-jacked by the left in an effort to cause children to disdain their own country.  If United States citizens don’t begin their own push-back and insist on truth in the classroom, we will lose our Constitutional Republic. Make no mistake – this is the intended goal. For decades, government schools have been undermining families, Christianity, our freedoms, and every sense of patriotism for our country. We have said time and time again, it is no wonder millennials voted overwhelmingly for self-proclaimed Socialist Bernie Sanders. Children have been taught that our Founders and our form of government are oppressive and bad. More recently, they have been taught through the Common Core Standards to be activists for social change, beginning in kindergarten.

The parents’ coalition hopes the film will “inform Americans of the trillions of dollars wasted on federal education in the last 40 years with nothing to show for it but stagnant test scores and declining student academic achievement.”

“Serious conversations are happening throughout the country about the legitimate and effective role of the federal government in education,” the group observed. “It is the goal of USPIE to return America’s education to its proper local roots and restore parental authority over their children’s education.”