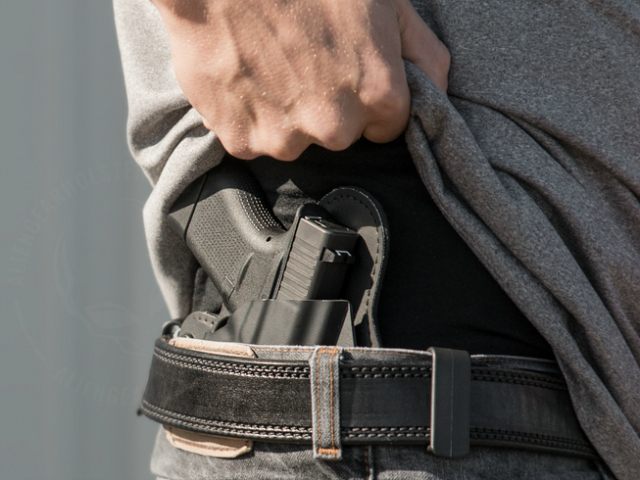 The suit, Call, et.al. v. Jones et. al., was filed in the United States District Court for the District of Maryland.

The Firearms Policy Coalition (FPC), the Citizens Committee for the Right to Keep and Bear Arms, and Maryland Shall Issue, Inc., are plaintiffs along with the SAF.

Rather, WBALTV reports the state requires the law-abiding citizen with no criminal record to show “good and substantial reason” for wanting to carry a gun on his person.

The lawsuit filed by SAF, FPC, and the rest of the Plaintiffs seizes on this regulation, noting that it greatly limits the number of concealed carry permits that would otherwise be issued, were the threshold that of being law-abiding and having no criminal record.

The Plaintiffs argue, “The State of Maryland has criminalized the carrying of handguns by ordinary citizens, making it wholly unlawful for law-abiding citizens to exercise their fundamental right to bear arms in public for self-defense without first satisfying the State that they have a ‘good and substantial reason’ to do so.”

They further claim that the structure of Maryland’s concealed permit issuance system means self-defense “is not a sufficiently good reason” to be allowed to carry a handgun on one’s person.

According to Maryland, an ordinary citizen must provide documented evidence of concrete threats or recent assaults to obtain a permit from the state to carry a handgun in public. That restriction is akin to a state law concluding that the general desire to advocate for lawful political change is not a sufficiently “good and substantial reason” to exercise the right to free speech, and it cuts to the very core of the Second Amendment, no less than such a restriction would gut the First.

SAF founder and Executive Vice President Alan Gottlieb commented on the suit, claiming that “anti-gun Maryland officials” have been hiding behind the “good and substantial reason” regulation for years.

He said, “By setting this arbitrary standard, state bureaucrats have been routinely denying Maryland citizens their right to bear arms. The state cannot be allowed to continue this discriminatory practice because it essentially gives public officials the power to deny someone’s fundamental, constitutionally-protected rights on a whim.”

AWR Hawkins is an award-winning Second Amendment columnist for Breitbart News and the writer/curator of Down Range with AWR Hawkins, a weekly newsletter focused on all things Second Amendment, also for Breitbart News. He is the political analyst for Armed American Radio. Follow him on Twitter: @AWRHawkins. Reach him at [email protected]. You can sign up to get Down Range at breitbart.com/downrange.