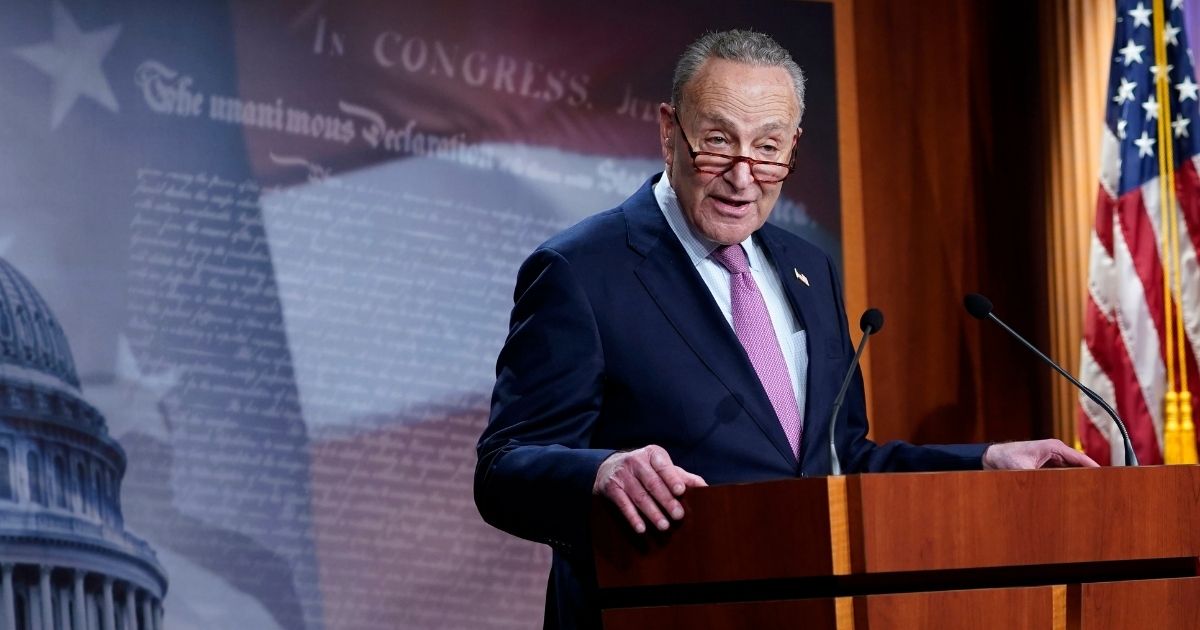 Over the course of his campaign, Biden has announced a series of far-left positions on transgender issues, including the inclusion of biological men in female spaces.

During a Tuesday news briefing, Schumer said he agrees with Biden’s plan to give transgender students in federally funded schools access to “sports, bathrooms and locker rooms in accordance with their gender identity.”

“Joe Biden said that on his first day of office, he will give transgender students access to sports, bathrooms and locker rooms in accordance with their gender identity in federally funded schools,” a reporter said.

“Do you think he has the ability to do this and do you agree with his decision?” she asked.

TRENDING: Candace Owens Schools Fact-Checker and the Result Is Incredible

Sen. Schumer says “I agree” with Joe Biden’s plan to give transgender students in federally funded schools access to “sports, bathrooms and locker rooms in accordance with their gender identity.”
pic.twitter.com/nTZcjtzfGQ

“I agree with the decision and I know he’ll check things out thoroughly, legally,” Schumer responded.

According to Biden’s campaign website: “On his first day in office, Biden will reinstate the Obama-Biden guidance revoked by the Trump-Pence Administration, which will restore transgender students’ access to sports, bathrooms, and locker rooms in accordance with their gender identity.”

Should biological men be allowed to enter female-only spaces?

Moreover, in a statement in October, the former vice president pledged to sign a bill aimed at helping solve what he called an “epidemic” of “violence against transgender and gender non-conforming people.”

The bill would alter the Civil Rights Act of 1964 by adding “sexual orientation” and “gender identity” to the protected characteristics under federal anti-discrimination law. That would result in public schools being forced to allow biological men who identify as transgender women to participate in women’s sports.

What seems to be lost on leftists such as Biden and Schumer is that allowing for a new category of “gender identity” makes sex-based rights nearly impossible to enforce, as any man could, at any time, claim unfettered access to female-only spaces or privileges based solely on a gender identity claim, completely eliminating any and all female sex-based protections.

Support for a system that could and likely would be abused by predatory and opportunistic men isn’t even the most radical of Biden’s positions on transgenderism, however.

During an ABC News town hall event in October, Biden made it clear he supports childhood transgenderism.

“I’m the proud mom of two girls, 8 and 10,” Mieke Haeck from State College, Pennsylvania, said during the event in Philadelphia. “My youngest daughter is transgender.”

Joe Biden is asked a question by a woman with an *8-year-old* transgender daughter. pic.twitter.com/n1azNd6QDB

She then asked the former vice president how he would “ensure that the lives and rights of LGBTQ people are protected. under U.S. law.”

“The idea that an 8-year-old child or a 10-year-old child decides, ‘You know, I decided I want to be transgender. That’s what I think I’d like to be. It would make my life a lot easier,’” Biden replied. “There should be zero discrimination. … So I promise you there is no reason to suggest that there should be any right denied your daughter or daughters, whichever one or two –”

“One, your daughter — that your other daughter has a right to be and do. None, zero,” Biden said.

Left-wing figures like Joe Biden have become increasingly in support of childhood transgenderism — a radical ideology that allows teenagers, adolescents and even pre-adolescent children to decide what gender they are.

Through his campaign to fight for transgender “rights,” Joe Biden is launching a full-on assault on the rights of women and children.

It just goes to show you how much is at stake over the next four years.