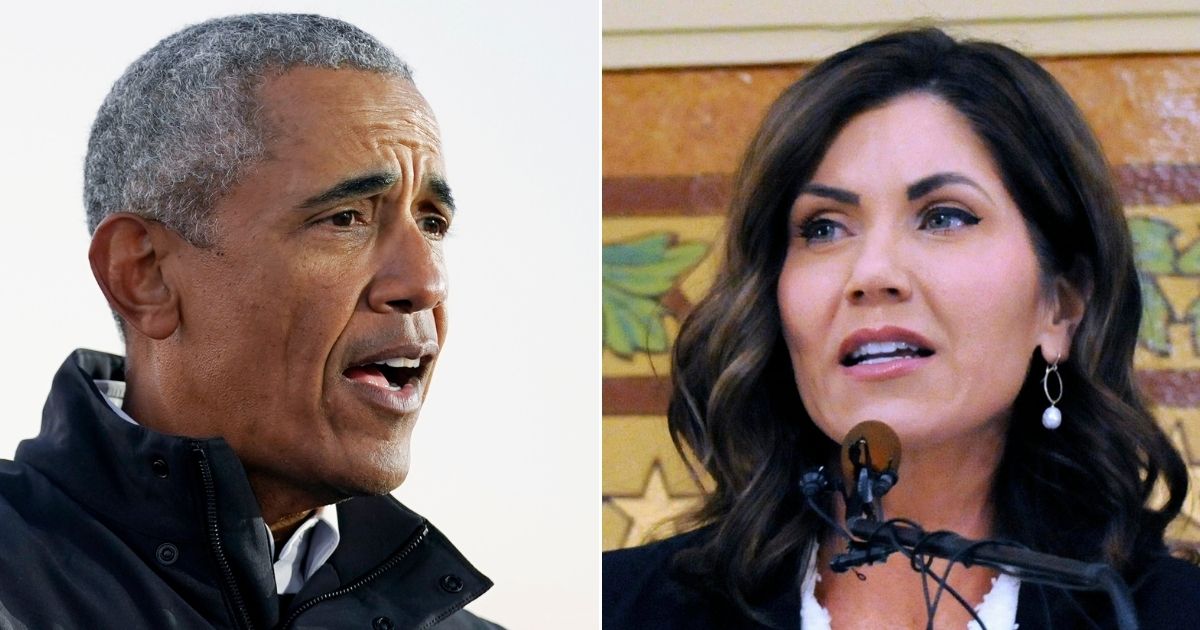 “I’m Not Yet Ready to Abandon the Possibility of America,” reads an excerpt from Obama’s book quoted by The Atlantic.

“I wrote my book for young people — as an invitation to bring about, through hard work, determination, and a big dose of imagination, an American that finally aligns will all that is best in us.”

The South Dakota Republican was not impressed.

“Obama had 8 years, including 2 with full control of Congress,” Noem tweeted Thursday.

“He sent our jobs to China, left our healthcare system in disarray, our foreign policy in shambles & our people divided.”

Instead of blaming President Donald Trump, she said, “Obama should consider what led to 2016.”

What a ridiculous message. Obama had 8 years, including 2 with full control of Congress. He sent our jobs to China, left our healthcare system in disarray, our foreign policy in shambles & our people divided. Instead of blaming Trump, Obama should consider what led to 2016. pic.twitter.com/9Vv4EUSbLg

In The Atlantic’s excerpt from Obama’s book, which will be released Tuesday, the former president talked about the end of his presidency and the challenges the country has faced over the year, including the coronavirus pandemic and nationwide protests against racial injustice.

“Our democracy seems to be teetering on the brink of crisis — a crisis rooted in a fundamental contest between two opposing visions of what America is and what it should be,” Obama wrote.

“A crisis that has left the body politic divided, angry, and mistrustful, and has allowed for an ongoing breach of institutional norms, procedural safeguards, and the adherence to basic facts that both Republicans and Democrats once took for granted.”

He said “the jury’s still out” on whether Americans’ “experiment in democracy can work” and “if we can actually live up to the meaning of our creed.”

“I’m encouraged by the record-setting number of Americans who turned out to vote in last week’s election, and have an abiding trust in Joe Biden and Kamala Harris, in their character and capacity to do what is right,” Obama wrote.

Do you agree with Gov. Kristi Noem?

“But I also know that no single election will settle the matter. Our divisions run deep; our challenges are daunting.”

In another part of the excerpt from Obama’s 768-page memoir, Obama said Americans were “spooked by a black man in the White House,” according to CNN.

“It was as if my very presence in the White House had triggered a deep-seated panic, a sense that the natural order had been disrupted,” he wrote.

“Which is exactly what Donald Trump understood when he started peddling assertions that I had not been born in the United States and was thus an illegitimate president. For millions of Americans spooked by a Black man in the White House, he promised an elixir for their racial anxiety.”