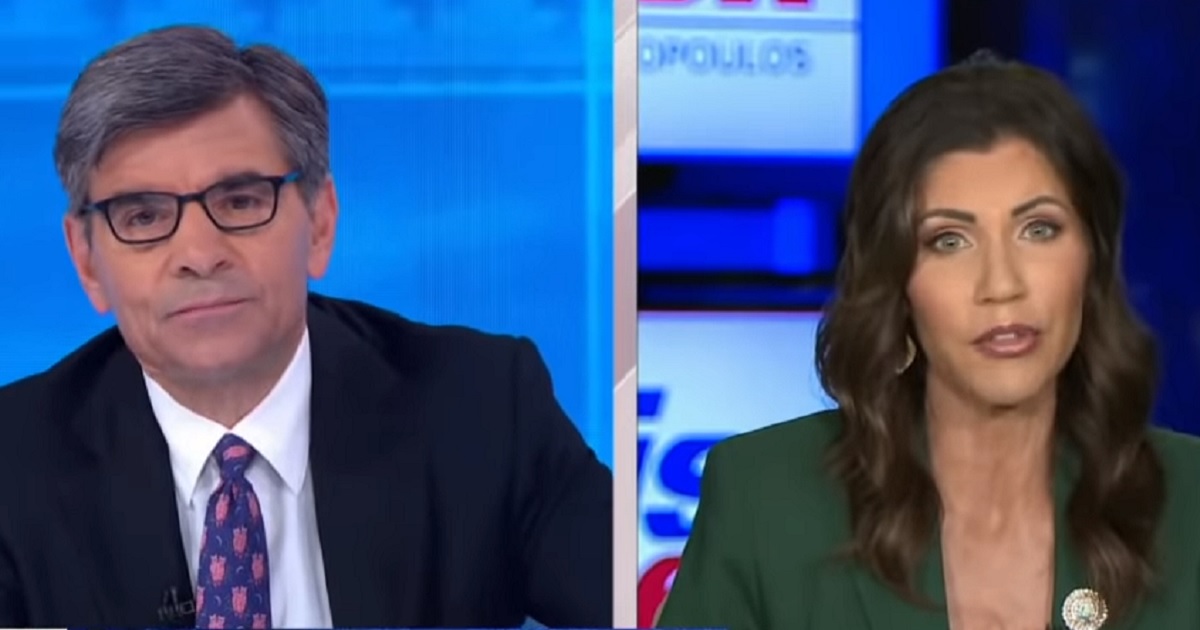 George Stephanopoulos made his name running communications for the Clinton White House in the 1990s.

A quarter-century later, he’s running Democratic communications at ABC News, desperately trying to convince Americans that the 2020 election is over and done with.

Kristi Noem had a different idea.

The South Dakota governor, a Republican who endeared herself to President Donald Trump’s supporters nationwide with her refusal to cater to the cowards of the coronavirus outbreak, took to ABC’s “This Week” on Sunday to spar with Stephanopoulos about the state of the 2020 race.

So many serious election integrity concerns:

For starters, Noem cited the disputed election of 2000, when Democrat Al Gore conceded the race, then withdrew his concession, then put the country through more than a month of uncertainty while his team of election lawyers tried to undo the results of the Florida vote.

Why, she asked, is Trump not afforded the same courtesy – along with the more than 70 million Americans who voted to keep him in the White House instead of entrusting the country to a confused, corrupt septuagenarian who has trouble remembering what office he was running for?

“What I think is going on here, George, is that this is all premature. This is a premature conversation because we have not finished counting votes,” Noem said. “There are states that have not been called, and back in 2000, Al Gore was given his day in court. We should give President Trump his day in court.”

Check out the whole interview here. Noem’s opening salvo against New York Gov. Andrew Cuomo alone is worth the watch.

On the topic of the 2020 election, Noem said that it’s simply time to let the process work through – an idea Democrats and the mainstream media are clearly uninterested in, given their eagerness to present the results as a fait accompli in former Vice President Joe Biden’s favor.

“Election Day needs to be fair, honest and transparent, and we need to be sure that we had an honest election before we decide who’s going to be in the White House the next four years,” she said.

Stephanopoulos – sounding for all the world like the Democratic National Committee shill he is at heart – objected that there was no evidence of “widespread fraud.”

(Beware of Democrats bearing adjectives. Mere “fraud” isn’t good enough. It has to be “widespread.” And it will be a cold day down under before Stephanopoulos or any other Democrat will admit to any fraud “widespread” enough to defeat a Democrat running for office.)

RELATED: Where’s Hunter? Joe Biden Brings His Son Who Is Under Federal Investigation on Stage with Him

Speaking calmly, and at times straight through Stephanopoulos’ objections, Noem made points unknown to most Americans who rely on Stephanopoulos and his fellow travelers in the mainstream media for their information – like crooked computers in Michigan that unaccountably changed votes from one party to another, or determined dead Democrats casting votes in Pennsylvania.

“People have signed legal documents, affidavits, stating that they saw illegal activity. That is why we need to have this conversation in court,” she said.

“George, I don’t know how widespread it is. I don’t know if it’ll change the outcome of the election. But why is everyone so scared just to have a fair election and find out?

“We gave Al Gore 37 days to run the process before we decided who was going to be president. Why would we not afford the 70.6 million Americans that voted for President Trump the same consideration?”

For Stephanopoulos and other mainstream media liberals, of course, the reason for that is simple: Al Gore is a Democrat and Trump is a Republican. Therefore, the opinions of Trump’s 70 million voters can be safely discarded.

With a condescension that would have been called “mansplaining” if he had been a conservative interviewing a liberal, Stephanopoulos rattled off a list of states and the voter discrepancies between the candidates before challenging Noem again to explain why the election should not be considered over.

“All I’m asking for, George, is that we don’t break this country,” Noem said. “When you break the process on which we elect our leaders, you will break America forever.”

A fair-minded observer might think that breaking America forever has been the goal of the left for decades.

It’s out in the open now in the form of “mostly peaceful riots” in the streets that leave a trail of shattered glass and burned-out buildings.

It’s out in the open in the nation’s capital, where the Democratic Party made no secret of its plans to try to cement its hold on power by expanding the Supreme Court with pliant “justices” and ending the Senate filibuster that puts a brake on radical legislation.

Do you think Democrats are afraid of what might be uncovered about the 2020 presidential election?

Noem and every other American can see it.

“This isn’t just about this election,” Noem said. “This is about every election in the future, and the fact that the American people, the everyday people who get up and work hard, that are suffering through this pandemic, that have tragically lost family members, that they need to know at least that America still functions and we care about doing things right.”

Looking like an even worse sap than usual, Stephanopoulos ended the interview with little grace and less class, but he didn’t have an answer for Noem.

The only answer liberals know when it comes to real challenges is “shut up.”

The social media giants Facebook and Twitter imposed silence on corruption allegations against Biden prior to the election. The network TV news giants did it even more.

For crooked “journalists” like Stephanopoulos, sometimes, censorship like that is the only kind of communication they know.

It doesn’t work so well when there’s time to think – which is what Democrats are afraid of.