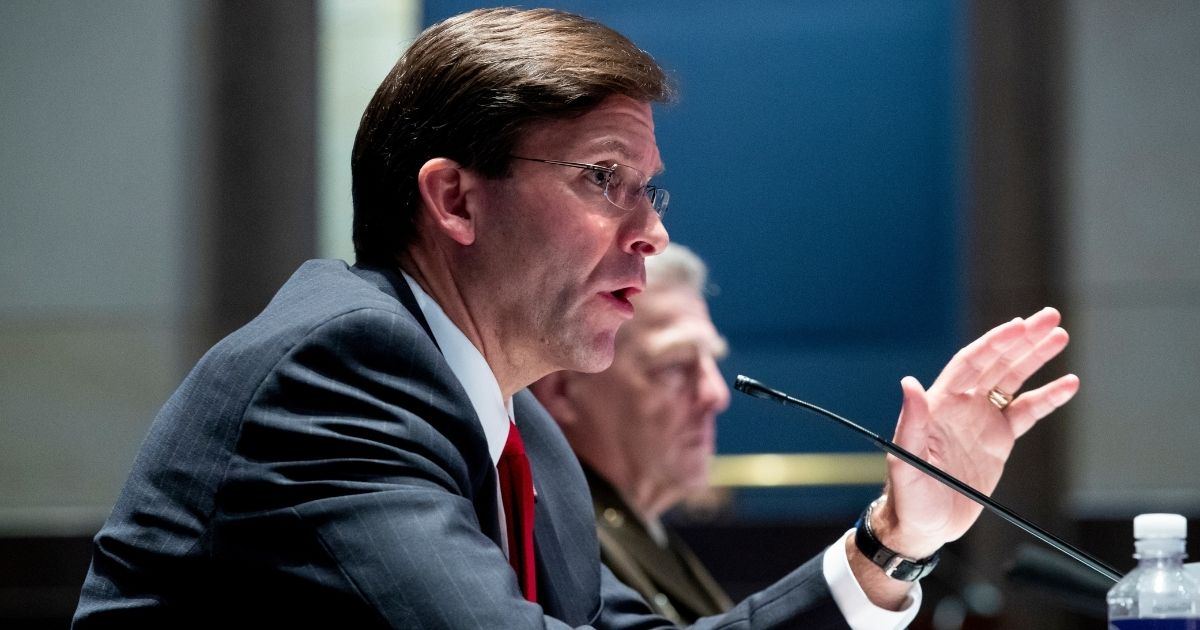 On Thursday, NBC News reported that Defense Secretary Mark Esper was effectively packing his bags and leaving the administration, no matter what happened in the election.

“It’s not uncommon for Cabinet secretaries to prepare undated letters of resignation during a presidential transition, giving the commander in chief the chance to replace them for a second term,” NBC News noted. However, the outlet also made it clear that Esper had “long been at odds with [President Donald] Trump,” citing disagreements over whether to use federal troops to quell rioting this past summer and whether to rename military bases and ships honoring Confederate military figures.

Pentagon spokesman Jonathan Hoffman, however, said that Esper isn’t planning to resign, and indicated that his agenda includes ensuring the Trump administration’s military policy goals can’t be undone, even if a new president is inaugurated on Jan. 20.

“The NBC story is inaccurate and misleading in many ways. To be clear, Secretary of Defense Esper has no plans to resign, nor has he been asked to submit a letter of resignation,” Hoffman said in a statement.

“He continues to serve the nation as the Secretary of Defense at the pleasure of the President and is working on the irreversible implementation of the National Defense Strategy.”

He continues to serve the nation as the Secretary of Defense at the pleasure of the President and is working on the irreversible implementation of the National Defense Strategy.

That may sound pretty pro forma, but the “irreversible implementation of the National Defense Strategy” part is more substantive than you might think. It’s a line that the Pentagon has used not infrequently over the past year.

First, a quick primer on the National Defense Strategy: The NDS is a document prepared by the Pentagon that outlines where our country’s defense resources are going.

Does the military need to be modernized and strengthened?

The administration has cited emerging challenges from China, North Korea and Russia along with the changing nature of warfare as reasons modernization and increased strength are necessary in the wake of the Obama years. The 2018 NDS, for instance, noted that America had to take into account a “resilient, but weakening, post-WWII international order” and “rapid technological advancements and the changing character of war.”

“A more lethal, resilient, and rapidly innovating Joint Force, combined with a robust constellation of allies and partners, will sustain American influence and ensure favorable balances of power that safeguard the free and open international order,” the NDS read.

“Collectively, our force posture, alliance and partnership architecture, and Department modernization will provide the capabilities and agility required to prevail in conflict and preserve peace through strength.

“The costs of not implementing this strategy are clear. Failure to meet our defense objectives will result in decreasing U.S. global influence, eroding cohesion among allies and partners, and reduced access to markets that will contribute to a decline in our prosperity and standard of living. Without sustained and predictable investment to restore readiness and modernize our military to make it fit for our time, we will rapidly lose our military advantage, resulting in a Joint Force that has legacy systems irrelevant to the defense of our people.”

Speaking before the Heritage Foundation on Oct. 15, Esper said that the implementation of the NDS has been his “top priority.”

RELATED: Defense Department Rep Amazed After 1 Shot with New Weapon Upgrade: ‘Be Expecting an Order from Us’

“This strategy guides our work to protect our comparative and competitive advantages and to defend a free and open global order along three lines of effort: first, improving the lethality and readiness of the force; second, strengthening allies and building partners; and third, reforming the department for greater efficiency and accountability,” Esper said, according to a transcript on the Department of Defense’s website. “I also added a fourth, personal priority: taking care of our service members and their families.

“We have made great progress on all these fronts, which we distilled into ten targeted goals to drive change across the entire Defense Department enterprise — from focusing the department on China, to developing coordinated guidance to strengthen allies and build partners; from modernizing the force by investing in game-changing technologies, to reforming the Fourth Estate; and, from reallocating, reassigning, and redeploying forces in accordance with the NDS, to developing a new joint warfighting concept, just to name a few. “

And, as for that “irreversible implementation of the National Defense Strategy,” conservative organizations like the Heritage Foundation approve.

“The increased level of funding is necessary for the military services to better balance their competing priorities of providing current levels of readiness and modernizing and preparing for deterrence in the context of great power competition,” an April report from the conservative think tank read.

“Every service is going through the challenge of prioritizing its efforts, and the increased funding will provide a better margin and context in which to make those decisions.”

The increased funding has been there. In both 2020 and 2021, the Department of Defense’s budget is over $930 million, up from $819 million in the last year budgeted under the Obama administration.

So no, Esper seems to indicate he’s not going anywhere and he’s still looking to secure that “irreversible implementation of the National Defense Strategy.”

For Trump voters and defense hawks who might be concerned about what happens after Jan. 20, those words are more than just a pro forma statement. The clock is ticking, after all.