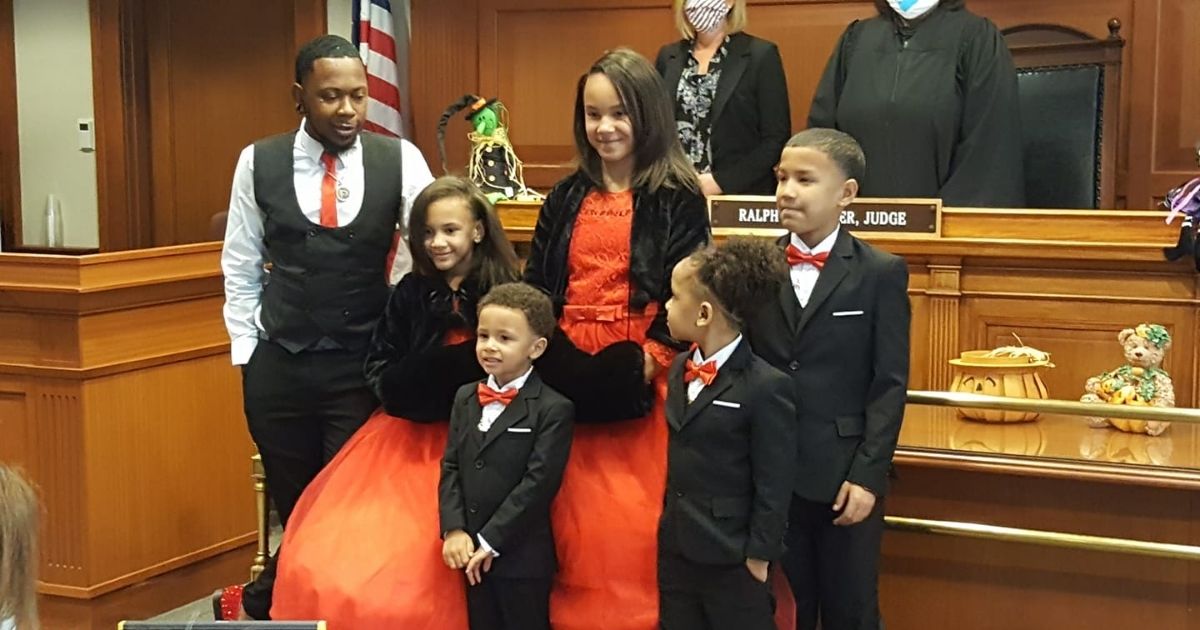 In a world that is trending toward fewer children per couple, it takes a very special person to adopt an entire family. It takes an even stronger person to adopt five kids as a single parent — but Robert Carter is that person.

Carter, from Cincinnati, Ohio, is clearly a generous person to open his home to five siblings, but it’s an incredibly important mission for him because of his own history.

“My mom had nine kids, and I didn’t see my youngest again,” he said, according to WXIX-TV.

“He was two. I didn’t see him again until he was 16, so for me going through that, I knew how important it is for them to see each other and be around each other.”

Placed in the foster system at age 12, it was years before he saw some of his siblings again, and when he was emancipated he took in and began caring for two of his younger siblings, WLWT-TV reported.

TRENDING: There's Still the Possibility of a 269-269 Electoral College Tie – Here's What Would Happen Next

The need for family to stick together is ingrained in him, and when he began fostering Robert Jr., Giovanni and Kiontae in 2019, he did his best to get them time with their sisters Marionna and Makayla.

“When I had my boys before I got the girls, that’s all they talked about was their sisters,” Carter said.

The children hadn’t seen each other for half a year when he welcomed the three boys into his home, so he got to work with the girls’ foster mothers to set up visits.

“We met up for visits, and all the kids were crying,” Carter said.

“They didn’t want to leave each other, and at that moment, I knew, OK, I have to adopt all five.”

“I understand how they feel,” he added to WLWT.

“I understand what they went through, so it really touched me. I was already thinking about adopting all of the kids but when I saw them crying, I was like, ‘Ok, I’m going to take all five to keep them together.'”

On Oct. 30 the adoptions were made official.

RELATED: Michael J. Fox Opens Up About Recent Struggles with Parkinson's Disease: My ‘Memory Is Shot'

“I’m relieved because I tried to go through the process before and it didn’t work out, but now I’m just happy that it’s over and I’m their dad for the rest of their life, and they know that they’ll never have to go through what they went through again,” Carter said.

The adoption is the first of its kind that case manager Stacey Barton has seen.

“I’ve had married couples who have adopted six or seven, so this was a unique experience for me. Children need families, and it’s an opportunity for Mr. Carter to show the community that he can do it and others can too.”

“Mr. Carter was the only foster parent willing and able to adopt all of the children,” Barton continued.

“His childhood background has made him aware of the importance of keeping siblings together. He says that he enjoys being their father and that parenting them is easier than he could have ever imagined!

“His life is busy, with a lot of love, laughter and loudness! I have enjoyed working with him and witnessing the children bond as siblings.”

The family is now looking to move into an even larger home where Carter will help his five kiddos “grow into our next future leaders,” according to a GoFundMe set up for the family.

Carter said that a lot of what they’re up to now is “[m]aking memories to replace a lot of the bad ones.”

Because he went through the same trauma, he knows what they need to hear.

“Every night I talk to them and let them know, ‘I’m your dad forever. I know what it’s like and I’m always here for you,'” he explained.

“Like Marionna. She’s warmed up so much since the beginning. At first, she didn’t like me. She walked in my room last night and said, ‘I just want to say thanks for taking us in and taking care of us when our real mom couldn’t.'”

“It just really touched me. So just making memories, letting them know I’m here and they never have to go. I’m here for them no matter what.”