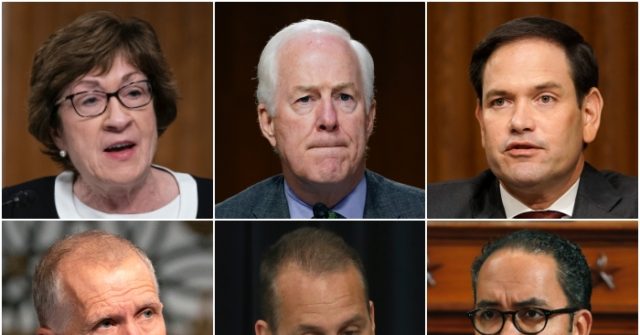 Six Senate and House Republicans are expected this week to engage with elected Democrats and amnesty advocates, from corporate donors to the open borders lobby, on “building bipartisanship on immigration reform.”

The event is being hosted by the pro-amnesty, pro-mass immigration American Business Immigration Coalition which is made up of a series of business donors such as the United States Chamber of Commerce and the open borders lobby like the George Soros-funded United We Dream organization.

A full list of special interests participating in the event include:

Currently, House Democrats are drafting an amnesty plan that will provide at least one subgroup of illegal aliens the ability to permanently remain in the U.S. and eventually apply for American citizenship. Democrat presidential candidate Joe Biden has vowed to send an amnesty plan to the Senate in his first 100 days in office.

A handful of Republican lawmakers, including Senators Lindsey Graham (R-SC) and Cornyn, have suggested working with a Biden administration on an amnesty deal.

There are an estimated 11 to 22 million illegal aliens currently living in the U.S. This illegal population is in addition to the more than 1.2 million foreign nationals who are given green cards annually and the 1.4 million foreign nationals who are given temporary visas every year. Today, the foreign-born population of the U.S. has boomed to at least 44.5 million. By 2060, the Census Bureau projects the foreign-born population will tick up to an unprecedented 69 million should current legal immigration levels continue.