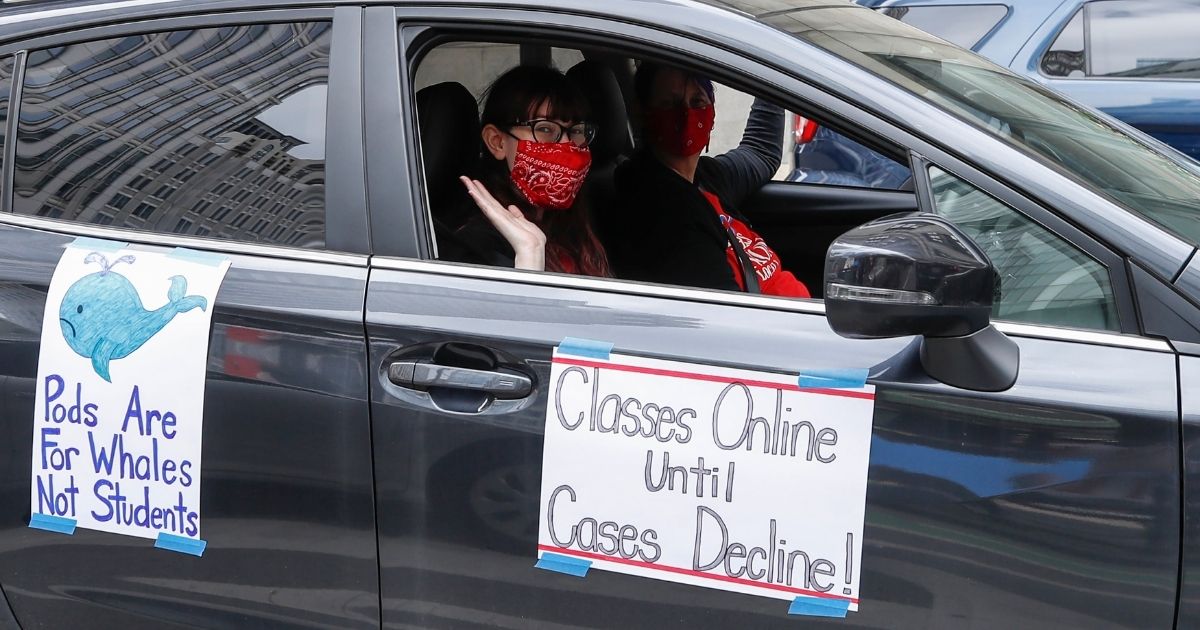 Even though evidence continues to pile up, showing that COVID-era restrictions were misguided at best, one Atlantic report says liberals just can’t get enough of them.

The report’s author, Emma Green, tweeted Tuesday about her findings, saying, “Very progressive people, who love to talk about ‘believing in science,’ were adopting COVID restrictions *over and above* CDC guidelines.”

A while ago, I started noticing something strange: Very progressive people, who love to talk about “believing in science,” were adopting COVID restrictions *over and above* CDC guidelines. I thought, is there a story here? And, well, wow, there is. https://t.co/tasiSw73Dy

According to Green, some liberals remain on guard against the coronavirus even while cases continue to stagnate and drop nationwide. She wrote, “For this subset, diligence against COVID-19 remains an expression of political identity — even when that means overestimating the disease’s risks or setting limits far more strict than what public-health guidelines permit.”

“In surveys,” Green wrote, “Democrats express more worry about the pandemic than Republicans do. People who describe themselves as ‘very liberal’ are distinctly anxious.”

The vaccine reportedly did not aid this anxiety at all. Green wrote that in the months following the vaccine rollout, “a third of very liberal people” were extremely concerned about catching the coronavirus, citing a study by University of North Carolina political scientist Marc Hetherington.

She continued, “And 43 percent of very liberal respondents believed that getting the coronavirus would have a ‘very bad’ effect on their life, compared with a third of liberals and moderates.”

The data clearly shows that liberals are scared to death of catching the coronavirus, a disease with over a 90 percent survivability rate, and just the tip of the iceberg has been hit so far.

Do you think some liberals have an addiction to COVID-era restrictions?

Of course, when the pandemic first hit, these numbers would have been far more reasonable. Green wrote, “Last year, when the pandemic was raging and scientists and public-health officials were still trying to understand how the virus spread, extreme care was warranted.”

It made sense to cancel and re-schedule weddings, forego in-person graduations and miss religious services while doctors and scientists investigated the virus in order to understand how to best prevent its spread. However, this is not at all the perspective of a liberal throughout the coronavirus.

Rather, many liberals swerved between fact and fiction. As Green wrote, many liberals highlighted and underlined scientific evidence just until it stopped supporting their narrative. Then, they left it.

According to Green, many liberals just wanted to use the pandemic as a way to oppose former President Donald Trump. Monica Gandhi, a professor of medicine at the University of California San Francisco, told Green, “If he said, ‘Keep schools open,’ then, well, we’re going to do everything in our power to keep schools closed.

“We went the other way, in an extreme way, against Trump’s politicization,” she said.

While the left pretends to care about the working man and his family, pushing for “common-sense” policy to protect American families at every turn, that’s all it seems to be: pretend. It looks as though many liberals don’t actually care about the well-being of their fellow citizens, and instead, use their plights as political tools.

And, even though liberals pretend like we’re in the exact same situation as we were a year ago, Green says otherwise. She wrote, “The spring of 2021 is different from the spring of 2020,” and as a result of over a year of careful study, scientists have far more information on how the coronavirus spreads.

She wrote, “Being extra careful about COVID-19 is (mostly) harmless when it’s limited to wiping down your groceries with Lysol wipes and wearing a mask in places where you’re unlikely to spread the coronavirus, such as on a hiking trail. But vigilance can have unintended consequences when it imposes on other people’s lives.”

“Even as scientific knowledge of COVID-19 has increased,” Green continued, “some progressives have continued to embrace policies and behaviors that aren’t supported by evidence, such as banning access to playgrounds, closing beaches, and refusing to reopen schools for in-person learning.”

Green is absolutely right. These policies seem well-intentioned, but in reality, they simply ignore the facts of the coronavirus and push more Americans into failure. Specifically, it’s been well-researched that children continue to be hurt by indefinite virtual schooling.

As Washington Post reporters Hannah Natanson and Laura Meckler wrote in November last year, children are “suffering emotionally, mentally and even physically” from their virtual schooling.

“School-age children are losing interest in food. They are complaining of back pain and burning eyes. They are developing feelings of depression.”

And yet, despite the fact some of our most vulnerable constituents are being pummeled by leftist policy, many liberals refuse to acknowledge as much. Instead, they push for even harder restrictions, shoving children into holes they will not be able to dig themselves out of.

It’s possible that, as liberals continue to “take a stand” by wearing masks outdoors and taking other “precautions,” they’re simply working to let go of the past. As Green wrote, old habits die hard and no less so when the establishment media has spoon-fed you liberal propaganda in hopes that you won’t let America go back to normal without a fight.

Hopefully, that is truly the case. What this report demonstrates without a doubt, though, is that some liberals do not want to let the United States go back to normal.

While some may battle “the trauma of the past year,” as Green called it, it’s evident that many progressives only want their narrative to be advanced — regardless of the cost.

Dr. Fauci Admits His Wearing Masks Indoors Despite Being Vaccinated Was...