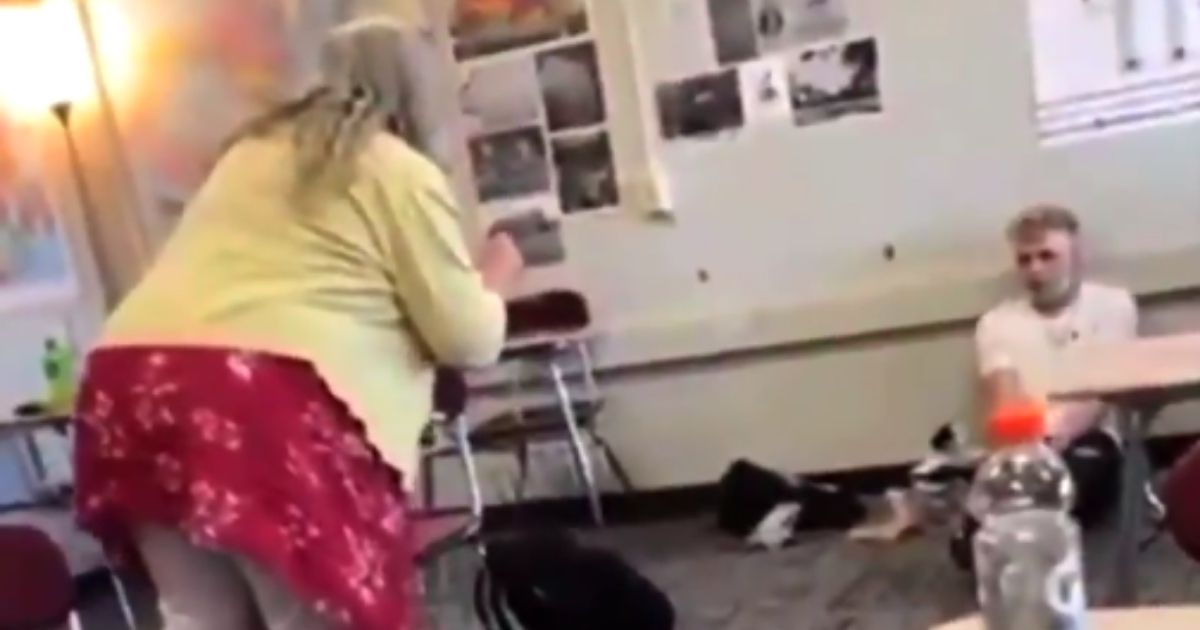 A Wisconsin teacher has been placed on administrative leave after a video that allegedly shows her berating and belittling a vaccinated student for not wearing a mask went viral online.

While we don’t know very much about the teacher in question, there is perhaps no better single piece of recent evidence that could be used to make a case for abolishing teachers unions, doing away with tenure and rebuilding the country’s education system from the ground up.

In a shocking video shared online this week, a young man was seen sitting up against a classroom wall while a teacher ripped him to shreds — apparently because he dared to not wear a mask after, according to the video, he’d been vaccinated.

“I don’t care if you’re vaccinated, you little dink,” the teacher screamed at the young man. “I don’t want to get sick and die. There’s other people you can infect just because you’re vaccinated.”

(According to Urban Dictionary, “dink” is a term that can be used to describe an “idiot.” Apparently, it was also a slang term used to describe the North Vietnamese during the Vietnam War.)

The young man calmly responded, OK,” and at one point explained that, in spite of the teacher’s use of gaslighting and emotional manipulation, he wasn’t bothered by how others on campus perceived him.

Two other videos showed more of the teacher’s rant:

According to a statement posted to Facebook by the School District of Poynette, the incident occurred Tuesday at Poynette High School.

“The School District of Poynette is aware of an incident that occurred today, May 11th, involving a teacher and student at the Poynette High School,” read a statement signed by District Administrator Matthew Shappell. “The District is initiating an investigation and the teacher involved has been put on administrative leave pending the outcome of the investigation.

“The District contacted the parents and we are taking steps to provide the appropriate support for the student involved,” the statement concluded.

The teacher in the video was not named. Additionally, it is unclear how many students witnessed the incident in person.

But it is certainly so-called educators like this woman who make a case for completely rethinking education after a year in which so many teachers have put kids last. While it’s true that we didn’t see the entire interaction, there isn’t an excuse for a rabid and unhinged pro-mask teacher berating a student in such a personal way.

Yelling at a lazy and entitled kid in sports or in a constructive manner is one thing. This woman went for the jugular — resorting to classic emotional and psychological abuse tactics — apparently over a mask, or rather a lack thereof.

Do you think America's education system is fundamentally broken?

Millions of American students have been kept out of schools for a year, in large part because teachers and their unions haven’t wanted to return to work.

The young man in this video, who apparently claimed to have been vaccinated, was completely dressed down by one of those people for not wearing a mask. We don’t know if this teacher is a member of one of those unions, but there’s a very good chance that she had been vaccinated as well, meaning she should simply quit if she doesn’t think it’s safe to be around other people.

Kids need structure, guidance and quality curriculum after being tormented by isolation for a year, thanks to lockdowns and school closures.

They certainly don’t need to be further tormented by paranoid adults.

Netanyahu Puts Biden on Blast in His Final Speech as Prime...