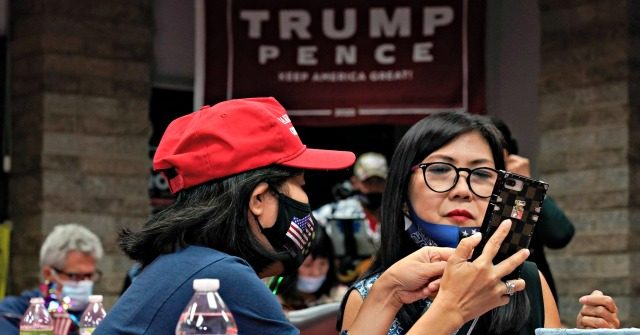 President Donald Trump boosted the GOP’s share of the small but fast-growing Asian vote to 31 percent, according to the exit polls.

Trump’s gain is a loss for America, complained Charles Blow, a progressive columnist at the New York Times. “Yet more evidence that we can’t depend on the ‘browning of America’ to dismantle white supremacy and erase anti-blackness,” he tweeted.

However, the GOP’s higher share of Asians — likely including a higher share of third-generation Asians — is nowhere near enough to offset the Democrats’ huge and growing number of imported immigrant supporters.

For example, the GOP is only competitive among Vietnamese voters, many of whom fled communism to the United States’ safe harbor in the 1970s.

Other Asian voters, including the fast-rising number of Indian and Chinese voters imported by the Fortune 500’s H-1B visa-worker program, are lopsidedly pro-Democrat. The Asian migrants mostly vote Democrat, despite their relative wealth, because the elite-left progressive Democrats are eager to diversify Americans’ culture and society to benefit immigrants and their “self-serving cultures.”

Trump says America is a country of Americans & rejects the ‘nation of immigrants’ myth.
Joe Biden says Americans are merely immigrants & their country is only an idea.
Hmm. Do shareholders ever hire CEOs who insist they don’t own the company?https://t.co/JvZcK1QY7o

“Seventy-two percent of registered Indian American voters plan to vote for Biden, and 22 percent intend to vote for Trump in the 2020 November election … [and] this tilt is more pronounced for U.S.-born Indian Americans,” an October 14 report by the Carnegie Endowment for International Peace said.

Asians comprised just three percent of the electorate, according to the poll. However, other data shows that the inflow of Asians is now greater than the inflow of Latinos.

The exit poll data comes from an exit survey funded by multiple media outlets. According to CNN, the exit polls, “…are a combination of in-person interviews with Election Day voters and telephone polls measuring the views of absentee by-mail and early voters, and were conducted by Edison Research on behalf of the National Election Pool. In-person interviews on Election Day were conducted at a random sample of 115 polling locations nationwide among 7,774 Election Day voters. The results also include 4,919 interviews with early and absentee voters conducted by phone. Results for the full sample have a margin of error of plus or minus 2 percentage points; it is larger for subgroups.”