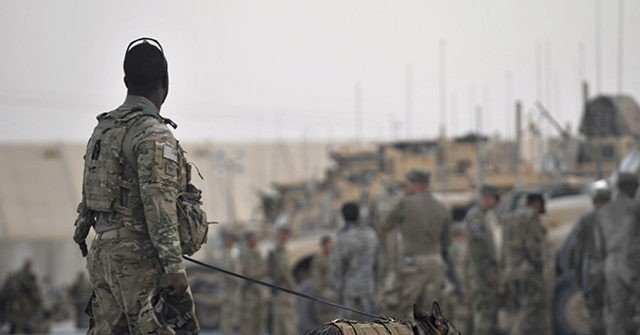 President Trump can cement his legacy as the president who ended America’s longest war if he withdraws all U.S. forces from or greatly reduces their numbers in Afghanistan, the president’s nominee for U.S. Ambassador to Afghanistan, William Ruger, said Monday.

“He would be the first president since at least Reagan to not start a major new war, and he’d be the president who got us out of America’s longest war. That’s what the president should want in the first paragraph of the history of his presidency,” Ruger told Breitbart News in an interview on Monday.

“It’s not just because it’s about his legacy or about politics, but it’s good policy,” he added.

A former senior administration official told Breitbart News that the president wanted to reduce the number of U.S. forces in Afghanistan to 2,500 by early next year, down from the approximately 4,500 there now. However, the Pentagon under Esper had resisted.

In Esper’s place, Trump appointed head of the National Counterterrorism Center Christopher Miller, a former Green Beret who was one of the very first U.S. troops to deploy to Afghanistan in 2001 after the September 11, 2001, attacks. The attacks were masterminded by al Qaeda leader Osama Bin Laden, who was given safe haven in Afghanistan by the Taliban. The U.S. military has been fighting the Taliban, al Qaeda, and other terrorists in Afghanistan ever since.

The Trump administration has brokered a peace deal with the Taliban that includes talks between the U.S.-backed Afghanistan government and the Taliban, and a total U.S. troop withdrawal by April if conditions are met. However, supporters of ending the war say the conditions can be used as an excuse by the foreign establishment to keep U.S. troops there in perpetuity, at the cost of billions of U.S. taxpayer dollars every year, in addition to human costs.

Ruger argued the U.S. has accomplished its goals in Afghanistan:

We have accomplished what we wanted to in Afghanistan, and we did that a long time ago. Killing Bin Laden, really punishing the Taliban for their state sponsorship of al Qaeda, and really quite decimating al Qaeda in Afghanistan. Those are the things we needed to do to keep us safe. We didn’t really need to be doing these other things related to democracy and values promotion. Those would have been nice things, but those were not necessary things. And when it comes to nice things, right, you have to weigh them against the costs.

And the costs of this has been borne by people — it’s about a trillion dollars, two trillion dollars depending on how you cut it. I think that higher number is better because of the fact that you have to think about all the veterans care and liabilities that you have ahead. But you also have a case in which you’ve had tens of thousands wounded. You have thousands dead. I mean, this is a grave cost,” he said.

Ruger, a Navy reservist who served in Afghanistan, said the U.S. does not need a big military presence there to prevent another 9/11.

He argued the Taliban has an interest in not allowing al Qaeda safe haven to attack the U.S. again so as to not bring U.S. troops back.

He also said the U.S. has tools — diplomacy, foreign assistance, counterterrorism capabilities from outside Afghanistan — to influence whether al Qaeda gains ground again inside Afghanistan.

“We should be hitting al Qaeda wherever it is. It doesn’t require us to have forces on the ground to do so. We don’t need to occupy every country where there could be an AQ threat. But what we need to do is have nimble forces that are well-resourced, good intelligence, good cooperation with other countries, particularly their police forces…a lot of this is more akin to policing, right, when it comes to counterterrorism,” he said.

As far as whether Afghanistan will devolve into civil war after it leaves, he said that it is not a good reason for U.S. forces to stay — to resolve a civil war.

Ruger, who is also vice president for research and policy at the Charles Koch Institute, blasted group-think in Washington around an “overly aggressive and overly militarized foreign policy.” And he blasted reports of Trump’s top foreign policy officials trying to mislead the president on how many troops he has in a country in order to avoid having to withdraw forces.

“There’s no excuse for the president’s top political appointees to try to mislead a president. You can disagree with a president in private, you can give advice, but once a decision has been made, you ought to faithfully execute it,” he said.

He urged Trump to act now to draw down forces from Afghanistan.

“Conservatism is going to face this battle coming up, it’s going to be between those who really want to change how America engages in the world, versus those who want to restore us back to the Bush-Cheney approach,” he said.