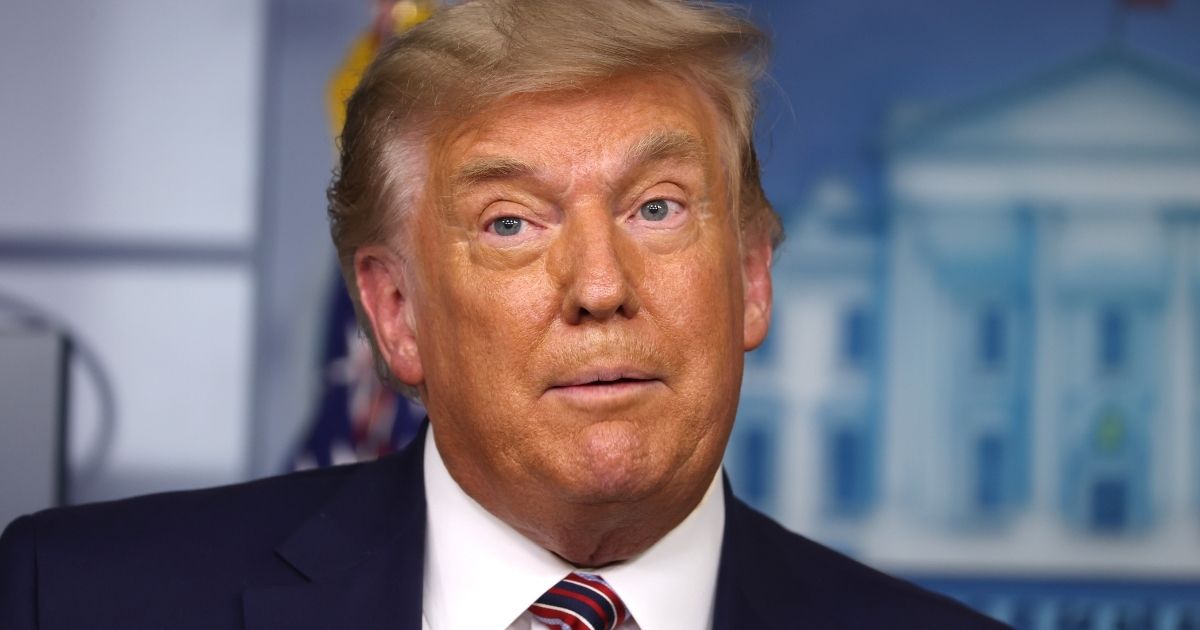 President Donald Trump said it was time to “take back America” Tuesday as he announced plans to veto the National Defense Authorization Act if safeguards remained in place to protect entities such as Google, Facebook and Twitter from lawsuits.

Big Tech platforms have angered conservatives by censoring Trump and others on the right while allowing false posts from leftist leaders to go unchecked.

Most notably, they have labeled or limited posts by the president questioning the security of mail-in ballots before the Nov. 3 general election and making allegations of voter irregularities and fraud afterward.

One example of Twitter’s labeling practice — placing a warning notification that reads, “This claim about election fraud is disputed” — occurred with an article Trump tweeted Tuesday shortly after he mentioned the potential veto.

TRENDING: Candace Owens Schools Fact-Checker and the Result Is Incredible

In his comments Tuesday on Twitter, Trump called for the elimination of Section 230 of the Communications Decency Act of 1996, a provision that protects tech companies from the legal risk of hosting third-party content.

The president called it “corporate welfare,” “a liability shielding gift from the U.S. to ‘Big Tech’” and “a serious threat to our National Security and Election Integrity.”

“Our Country can never be safe and secure if we allow it to stand,” he said.

Section 230, which is a liability shielding gift from the U.S. to “Big Tech” (the only companies in America that have it – corporate welfare!), is a serious threat to our National Security & Election Integrity. Our Country can never be safe & secure if we allow it to stand…..

“Therefore, if the very dangerous & unfair Section 230 is not completely terminated as part of the National Defense Authorization Act (NDAA), I will be forced to unequivocally VETO the Bill when sent to the very beautiful Resolute desk,” Trump said in a follow-up tweet.

…..Therefore, if the very dangerous & unfair Section 230 is not completely terminated as part of the National Defense Authorization Act (NDAA), I will be forced to unequivocally VETO the Bill when sent to the very beautiful Resolute desk. Take back America NOW. Thank you!

Social media companies have come under fire in Senate Judiciary Committee hearings, with Twitter CEO Jack Dorsey and Facebook’s Mark Zuckerberg being grilled about how their platforms handled particular subjects and articles.

Our communication around our actions on the @nypost article was not great. And blocking URL sharing via tweet or DM with zero context as to why we’re blocking: unacceptable. https://t.co/v55vDVVlgt

However, the Twitter CEO fiercely defended the provision that shields his company from lawsuits.

“Section 230 is the most important law protecting internet speech, and removing section 230 will remove speech from the internet,” he told lawmakers, according to Yahoo News.

Dorsey instead called for expanding Section 230 protections for Twitter and other platforms.

Trump, on the other hand, announced an executive order in May relaxing Big Tech’s legal safeguards.

Do you agree that social media platforms should lose Section 230 protection?

“Today I’m signing an executive order to protect and uphold the free speech and rights of the American people,” he said, according to a White House transcript. “Currently, social media giants, like Twitter, receive an unprecedented liability shield based on the theory that they’re a neutral platform — which they’re not — not an editor with a viewpoint.

“My executive order calls for new regulations, under Section 230 of the Communications Decency Act, to make it that social media companies that engage in censoring or any political conduct will not be able to keep their liability shield.