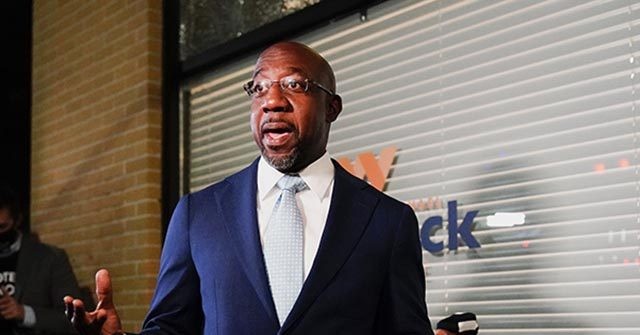 During an appearance on CNN’s “State of the Union” on Sunday, Raphael Warnock, the Democratic U.S. Senate nominee in Georgia, who faces incumbent Sen. Kelly Loeffler (R-GA) in a runoff in January, criticized those trying to “nationalize” his contest.

Warnock mentioned Senate Minority Leader Chuck Schumer (D-NY), who could ascend to Majority Leader if Warnock and another Georgia U.S. Senate race between Democrat Jon Ossoff and incumbent Sen. David Perdue (R-GA) go for Democrats, as one trying to capitalize on his contest.

“Listen, this is a Georgia race, and I’m Georgian,” he said. “I grew up in Savannah, Georgia. My church is in Atlanta. I’m pastor of the spiritual home of Martin Luther King Jr. I grew up in public housing, one of 12 children in my family. I’m number 11 and the first graduate of a four-year college in my family. I know personally the importance of good federal policy, combined with personal responsibility, work, grit, and determination. That is the reason I’m able to run for the United States Senate. I am an iteration of the American dream. And I’m running for the Senate because that promise is slipping away from far too many people. That is what this race is about.”

“The fact the matter is, Jake, voters don’t vote for politicians. It’s — this race is not about me,” Warnock added. “And Chuck Schumer’s name is certainly not on the ballot. I will tell you what is on the ballot. Health care is on the ballot, access to affordable health care. We have got 500,000 Georgians in the Medicaid gap. We have got 1.8 million Georgians with preexisting conditions. And if Kelly Loeffler has her way, people who have asthma, people who have hypertension, diabetes — these are folks in my family and in my church, folks who are survivors of cancer — may find themselves without health care. And that is what this race is about. And that what I will continue to lift up even as I move across the great state of Georgia. People are responding to that message. And that is why we are in such a strong position. She will try every desperate attack that she can make, but this race is about the people of Georgia.”