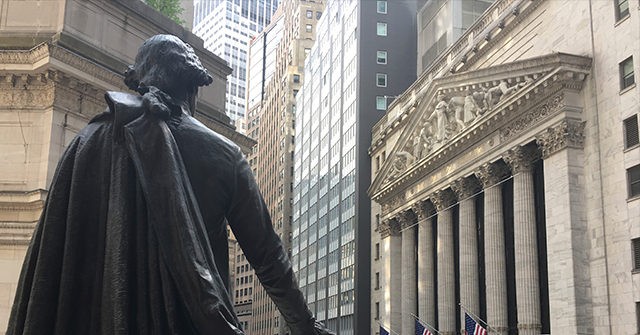 The stock market supposedly hates uncertainty. So why is it soaring after an election night that upended expectations, humiliated polls, and created conditions for a drawn-out fight over ballot counting that could last for weeks?

The Nasdaq Composite was up 4 percent Wednesday morning. The S&P 500 rose nearly 3 percent. The Dow Jones Industrial Average pushed up 2 percent. This is a very big day for investors and a very unexpected result following such an unexpected election night.

One plausible explanation is that the market does not loathe uncertainty as much as people think. When the uncertain future has potential upside as well as downside, investors risk missing out on gains if they sit on the sidelines.

Investors may also feel better that some of the more extreme risks appear to have been ruled out. Regardless of who occupies the White House next year, this was not a blue wave election. The Senate will remain in Republican control, denying Democrats an opportunity to pursue destabilizing projects such as creating new states or expanding the Supreme Court. The Republican Senate is also likely to block tax hikes or ambitious Green New Deal-type climate legislation.

A divided government may also be less likely to enact measures to rein in or break up powerful social media companies. That could explain why the tech-heavy Nasdaq Composite soared on Wednesday and why Communications Services is the second-best performing sector of the S&P 500.

The best performing S&P sector is health care. That too may be a relief trade. A divided government will not likely upend current health care policies, leaving the Obamacare-fattened profits of drug-makers, clinical chains, and hospitals in place.

While many on Wall Street looked at a Blue Wave as likely to lead to fiscal expansion, it is possible that a divided government will still manage to get a stimulus bill passed. It likely will not be as large as what an all-Democrat government would have passed and it may have to wait until the economy shows signs of weakness. But with the election behind us, perhaps lawmakers will be eventually willing to break bread with each other once more.

Finally, in the absence of a resolution of political questions, investors may be focused of fundamentals. Manufacturing is recovering at a faster pace than expected. The housing market is booming. Exports are rising. The economy is a lot like Donald Trump in Pennsylvania—not yet out of the woods, but much stronger than the experts predicted.