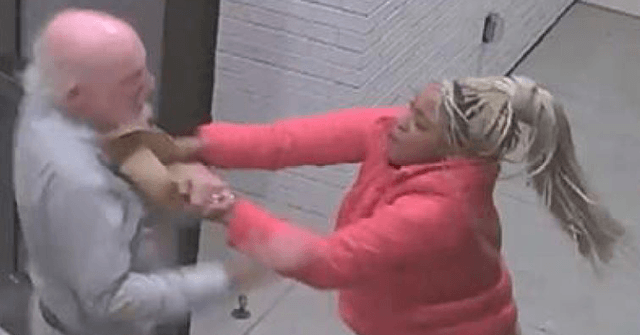 Police have released surveillance footage of a woman who allegedly assaulted a California veteran outside his apartment complex.

Randy McDonald heard an unidentified woman screaming outside his apartment, which houses formerly homeless veterans, shortly after 8 p.m. on October 21.

McDonald, who lives on the third floor, said he thought his training as a medic in the Air Force in the 1970s and 1980s could help the woman, so he went down to speak with her.

“Because no one else is doing it. I thought by the cops, the time they got here, it might be too late, cause I didn’t know what the situation was. I didn’t know if there was another person out here assaulting her,” McDonald told KTLA. “I just did my job as a veteran.”

McDonald said he let the woman in the lobby and tried making some phone calls on her behalf before the two went back outside.

But things took a violent turn when she asked for money for a hotel room. When McDonald told her he did not have any money, she allegedly grabbed him by the shirt and attacked him, punching him multiple times in the head and face.

The woman fled the scene, but the attack was captured on video.

“Her violent tendencies is what — it scares our detectives. Our detectives are looking for her, looking for someone that might be able to identify her,” Santa Ana police officer Sonia Rojo said.

She was last seen wearing tan leggings and a pink jacket.

US home construction jumps 5.8% in December to 1.67 million