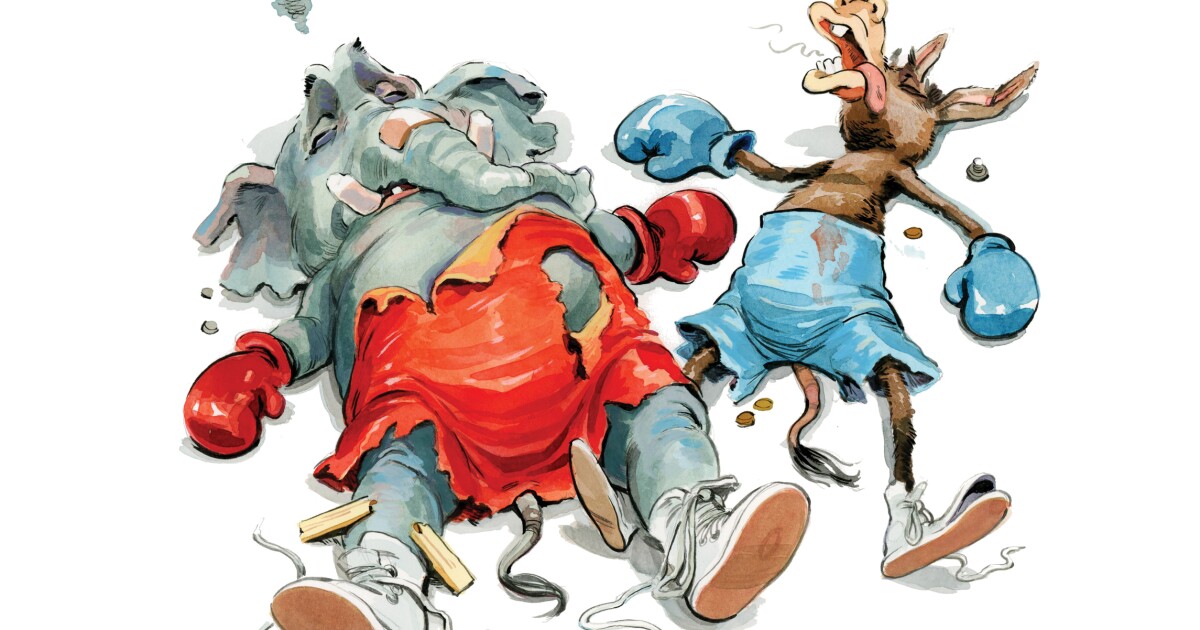 For those who longed for a respite from the 24/7 political and culture wars of the past four years, the apparent results of the 2020 election seemed to offer some hope. But will the prospect of someone not named Donald Trump in the White House and divided government ensure that the insanity of the last four years will end? Don’t count on it.

The outcome of the struggle between Trump and former Vice President Joe Biden in some key battleground states had yet to be finally resolved 48 hours after the polls closed. But the most likely outcome seemed to point to a victory for Biden even as Trump’s campaign resolved to fight to the bitter end, including in the courts, to change the verdict.

Trump’s energy and blustering resolve to ignore conventional wisdom and the advice of experts have produced some clear achievements on both the economy and foreign policy. But he is also the embodiment of chaos, resentment, and rage at his opponents. He stubbornly refused to adopt presidential decorum, adapt to the demands of the presidency, or at least cease his stream-of-consciousness commentary and tweets that have helped coarsen public discourse and turned American politics into a modern version of gladiatorial combat.

In the five years since he came down the escalator at Trump Tower, his political antagonists and their media cheering section never caught on to why so many people loved him or how not to be suckered into following him down every rabbit hole he dug for them. It didn’t take long for them to adopt the same conspiratorial mindset that the most famous proponent of birther theories about Barack Obama embraced. What followed was not only an upset victory powered by the resentment of his “deplorable” followers but the refusal of the Democrats and the media/pop culture/tech oligarch complex to accept his victory. That, in turn, led to the unproven conspiracy theories about Russian collusion, as well as a pointless and partisan impeachment process, that dominated American politics for three years.

In an administration that had its fair share of disasters, such as family separation at the border, as well as triumphs, such as a booming economy and Middle East peace agreements, it was Trump’s bad luck to have the coronavirus pandemic happen on his watch. That blew up the good economy and, though it can be argued his management of the calamity was probably no worse than what any of his opponents could have managed, also exposed how his undisciplined behavior and messaging can undermine public confidence in a crisis. He was gifted with a lackluster and unenergetic opponent in Biden. But COVID and general Trump Show fatigue that seemed to afflict everyone except the man orchestrating the pandemonium in the White House appeared too much for Republicans to overcome.

For those who had spent four years praying for the bad dream with the “bad orange man” to go away, this was the promise of bliss. But along with that result came another possible blessing for those longing for political peace.

Contrary to the expectations of aggrieved liberals who thought hatred of Trump would power a blue wave that would bring Democrats control of both chambers of Congress and the White House, the Republican Party didn’t implode as revengeful Never Trumpers predicted. Thanks to Trump’s hard campaigning, the GOP may have saved its Senate majority. And instead of Speaker Nancy Pelosi growing her majority, the Democrats lost several seats in the House.

That may have exploded the dream of a transformative election nurtured by the Bernie Sanders wing of the Democrats and his allies in “the Squad.” There would be no end to the Senate filibuster rules, no packing of the Supreme Court, no statehood for the District of Columbia and Puerto Rico (and the promise of four more Democratic senators), and no Green New Deal boondoggle to plunge the pandemic-plagued economy further into a financial abyss.

Surely, the exit of Trump from the stage and the need for both sides to compromise in order to get anything done should auger a return to some sort of political normalcy, or at least a ceasefire in the nonstop war of all against all that had characterized politics from 2016 to 2020.

Were it solely up to Biden and Senate Majority Leader Mitch McConnell, who, in theory, should return to his pre-Trump status as the most important Republican in Washington, that might be true.

In gentler times, a private agreement of the president and congressional leaders that they needed to do some business might have been enough to ensure some relief from the guerrilla warfare that has become business-as-usual inside the Beltway. But those expecting normalcy in the post-Trump era are mistaken. As the line from Game of Thrones went, “if you think this has a happy ending, you haven’t been paying attention.”

What can prevent the start of a new era of good feelings?

Start with the fact that Trump is not going away.

The president may ultimately be forced to concede defeat at some point if hopes for a reversal of fortune via recounts or court interventions don’t pan out. But the notion that Trump will, like his predecessors, spend the coming weeks being a good sport cooperating with a transition, or the following years working on memoirs and building a presidential library, is a fantasy.

A post-presidential Trump may not quite be the center of attention, but the media, both friendly and hostile, will still be addicted to him, monitoring his Twitter account and public appearances, giving him the kind of leverage over McConnell and congressional Republicans that no previous ex-president ever had or even wanted.

That doesn’t just mean that his congressional acolytes and Fox News tribunes could enable him to blow up any compromises that McConnell and House Minority Leader Kevin McCarthy would like to make. Unlike other defeated presidential candidates, he will also act as if he is still the head of his party, even though 2024 GOP prospects such as former Vice President Mike Pence, Tom Cotton, Nikki Haley, Ted Cruz, and many others would prefer that he let them shine.

Part of his power will stem from the sense of grievance that rank-and-file Republicans will hold on to after his defeat.

The emergence of hundreds of thousands of mailed-in ballots that altered outcomes in some states in Democrats’ favor may have been just the natural result of the unusual circumstances created by a pandemic-era election and the fact that Democrats were more afraid of voting in person than Republicans. But the optics of Democratic-run governments in places such as Philadelphia and Detroit administering this blow to GOP hopes were bound to be interpreted by Republicans as a conspiracy against their president. Indeed, after four years of an unprecedented level of anti-conservative and anti-Trump media bias and false collusion charges, they no longer believe anything broadcast on networks not named Fox (and not everything that’s even broadcast there).

Just as many Democrats have spent the past four years believing the myth that Hillary Clinton was defeated by Russian intervention, so, too, will Republicans hold on to the idea that this election was stolen from them by Democrats and the “deep state,” even if their claims turn out to be no more substantial than those of the Democrats. This will become part of the political landscape in a way that will poison the atmosphere every bit as much as the Russian plot story did.

Neither should anyone assume that Trump is done with electoral politics. He will be not much older than Biden is now if he runs in 2024, and, as the list of GOP prospects know only too well, if he wants the next Republican presidential nomination, it will be his for the asking.

Trump has transformed the party that he hijacked from its establishment in 2016. Despite the claims of Never Trump critics that he turned it into a personality cult, in many ways, his GOP is smarter, more relevant, and more electorally competitive than the one that Bush-era holdovers and Mitt Romney supporters were running. It has a working-class base and, as the 2020 results showed, more minority support than it has had in living memory.

But it is also angrier and more distrustful of governing- and educated-class elites than ever. It is now accustomed to viewing politicians playing by Queensberry rules and cutting deals as evidence of betrayal of their interests. The GOP establishment’s record of pre-Trump failure validates that point of view.

Trump’s continued appeal and perhaps that of his children — Donald Trump Jr. may have political ambitions, as may Ivanka Trump, whose recent avowal of pro-life views could foreshadow a future run for office as a Republican — is only part of the formula for a continuation of political warfare.

All the energy in both political caucuses is to be found in exactly the sorts of ideological warriors who will reject normalcy. That’s true on the Right with firebrands such as Sen. Josh Hawley and Rep. Matt Gaetz, and it’s just as much the case on the Left with Reps. Alexandria Ocasio-Cortez and Ilhan Omar.

Biden’s somnolent campaign may also be a preview of a weak presidency in which he will be unable to command his party without slipping into the kind of rhetorical excess that he has engaged in previously (such as his 2012 campaign speech in which he told African Americans that Romney and the Republicans want to “put y’all back in chains”). Like the last Congress, his may be an administration in which the radicals have far more influence than their numbers ought to give them.

An even more important factor is the way the media were radicalized in recent years.

Legacy outlets abandoned even the pretense of objectivity in covering Trump. Newspapers such as the New York Times incessantly editorialized in news headlines and story content. CNN trumpeted every new unproven conspiracy theory about his skulduggery as if it were fact. The refusal of nonconservative networks and publications to report on the story of Hunter Biden’s Ukraine and China business shenanigans in October made clear that most journalists believed their primary obligation was to defeat Trump, not report the news.

Some may think that once Trump leaves the White House, they can return to past ethical standards. But many liberal journalists, emboldened by the stands of writers and editors who believe their mission to support the Black Lives Matter movement trumped their obligation to report objectively, will never go back.

Encouraged by the willingness of social media and internet oligarchs to censor Trump and shut down conservative discourse, they will continue to fuel a war against conservatives in the media and pop culture outlets. Even if the politicians want calm, the media and entertainment shock troops the Democrats employed against Trump will ensure that the pot will be kept boiling.

What those who desire normalcy forget is that politics now plays the same role in many people’s lives once played by religion. That, and not just Trump’s tweets, is why so many have cut off friends and family who don’t share their views and regard a relationship or marriage with someone who doesn’t hold them as unthinkable.

With Trump still able to bully his party to continue to engage in all-out war and the radicals on the Left and their media enablers pushing just as hard from the other side, the post-Trump era could be as chaotic and angry as what it succeeded. Under these circumstances, normalcy and political peace may be a pipe dream.