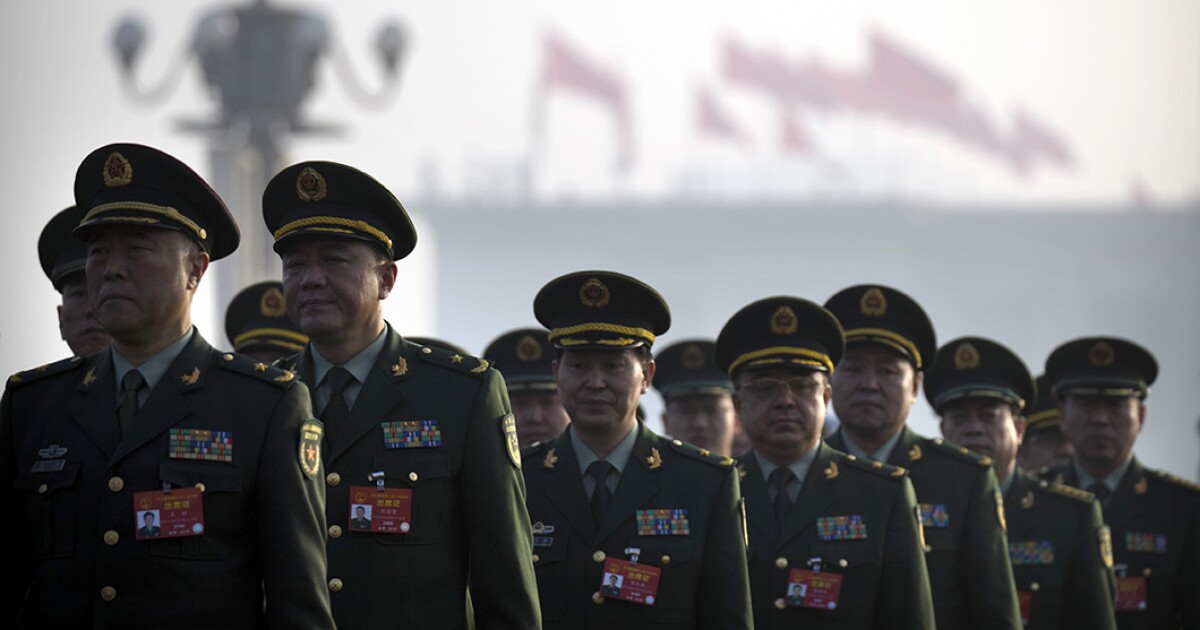 In 2020, the U.S. government exposed a half-dozen members of China’s People’s Liberation Army allegedly studying in the United States after lying on their student visa applications — just one of many statistics cited by the Justice Department related to charges against and prosecutions of Chinese Communist Party-linked individuals as it touted the success of its China Initiative on Monday.

“In the last year, the Department has made incredible strides in countering the systemic efforts by the PRC to enhance its economic and military strength at America’s expense,” Attorney General William Barr said. “While much work remains to be done, the Department is committed to holding to account those who would steal, or otherwise illicitly obtain, the U.S. intellectual capital that will propel the future.”

Multiple members of the Chinese military were charged by the Justice Department this summer for concealing their ties to China's military and allegedly committing visa fraud while acting as students or researchers at U.S. universities. In addition, the State Department forced the closure of the Chinese Consulate in Houston over claims that it was engaging in espionage in the U.S.

“This year, the FBI and Department prosecutors also exposed six individuals, studying in the United States, found to be connected to People’s Liberation Army military institutes, who concealed their affiliations from the State Department when applying for research visas to study at U.S. universities. In one of those cases, the Department alleged that a PLA officer was being tasked by superiors in the PRC to obtain information that would benefit PLA operations. In another case, a PLA medical researcher stands accused of following orders to observe lab operations at a U.S. university, which received funding from the U.S. government, in order to replicate those operations in the PRC,” the Justice Department said, adding, “after the FBI conducted interviews this summer that led to charges in those cases and the State Department closed the PRC’s Houston Consulate, a large number of undeclared, PLA-affiliated Chinese researchers fled the United States.”

“The Chinese Communist Party’s theft of sensitive information and technology isn't a rumor or a baseless accusation. It’s very real, and it’s part of a coordinated campaign by the Chinese government, which the China Initiative is helping to disrupt,” FBI Director Christopher Wray said. “The FBI opens a new China-related counterintelligence case nearly every 10 hours and we’ll continue our aggressive efforts to counter China’s criminal activity.”

The FBI director said in July that the FBI has more than 2,000 active investigations that trace back to the government in China and that these cases represented a 1,300% increase from one decade ago.

Researchers have also been arrested recently for concealing their ties to China’s Thousand Talents program while receiving U.S. government grants. The U.S. has arrested and charged a number of scientists, including Harvard’s chemistry department chairman, Charles Lieber.

“While membership in these talent programs is not per se illegal, and the research itself may not always be protected as a trade secret, we know the PRC uses these plans, such as the well-known Thousand Talents Program, as a vehicle to recruit individuals with access to U.S. government-funded research to work in the interest of the Chinese Communist Party,” Deputy Assistant Attorney General Adam Hickey said.

The DOJ press release came as the Washington Examiner learned the Trump administration is planning to escalate its crackdown against China.

The Justice Department also said Monday that in the past year, it had also brought fraud, false statements, tax, smuggling, and other charges against 10 academics working at U.S. research facilities, including three convictions. The DOJ also said it had opened a “record number” of overall Foreign Agents Registration Act investigations in the past year, including a “record number” of registrations from Chinese media companies too.

The DOJ specifically pointed to Xuehua Peng being sentenced to four years in prison for acting as an agent of China’s Ministry of State Security as he conducted “dead drops” to steal classified information and highlighted that Jun Wei Yeo was sentenced to more than a year behind bars for attempting to recruit U.S. citizens as agents of the Chinese security service.

The Justice Department stressed its efforts opposing Chinese cyberespionage. This summer, investigators accused two Chinese hackers, assisted by the Chinese government’s Ministry of State Security, of seeking to steal coronavirus research and engaging in a 10-year global cybercampaign stealing hundreds of millions of dollars worth of information. More recently, the DOJ handed down indictments against Chinese hackers, with top U.S. officials criticizing the Chinese government’s role.

The DOJ also touted its prosecutions related to China’s so-called “Operation Fox Hunt,” which included arresting a former New York Police Department officer, where more than half a dozen individuals acted as illegal foreign agents at the direction of the Chinese Communist Party as they attempted to coerce U.S. residents into returning to China as part of a global extrajudicial repatriation.